Ajo KTM’s Pedro Acosta returned to winning ways in Moto3 to strengthen his championship lead with victory in the German Grand Prix after a last-lap duel with Dennis Foggia.

The 17-year-old rookie won three of the first four races in 2021, but failed to crack the top six in the previous three rounds before returning to the top of the podium at the Sachsenring having come from 13th on the grid.

Tatsuki Suzuki grabbed the holeshot from third on the grid on his SIC58 Honda, leading a Japanese 1-2 ahead of CIP KTM’s Kaito Toba as poleman Filip Salac slid back.

Toba swooped into the lead at the Sachsen Kurve left at Turn 12, with an angry John McPhee following him through into second on a weekend in which the Petronas Sprinta rider had his crew chief moved to the squad’s Moto2 team.

Starting 13th, championship leader Acosta was ninth after the opening lap and had cracked into the top six by the start of the third tour on his Ajo KTM.

On lap four Leopard Honda’s Foggia took the lead for the first time, while Acosta worked his way into the podium spots behind before taking the lead two tours later.

Despite the twisty and tight nature of the Sachsenring, the lead changed hands a number of times across the 27-lap race in typical Moto3 fashion.

Foggia, Acosta, Toba and Suzuki took turns leading the pack as the race wore on, with Foggia working his way back into the front of the pack with six laps to go.

Acosta passed Foggia at the Sachsen Kurve to take the lead on the final lap, with the Leopard rider scything past again at the Turn 7 left-hander.

But Foggia ran it wide slightly and let Acosta back through again, with Toba moving through to second on the final lap. 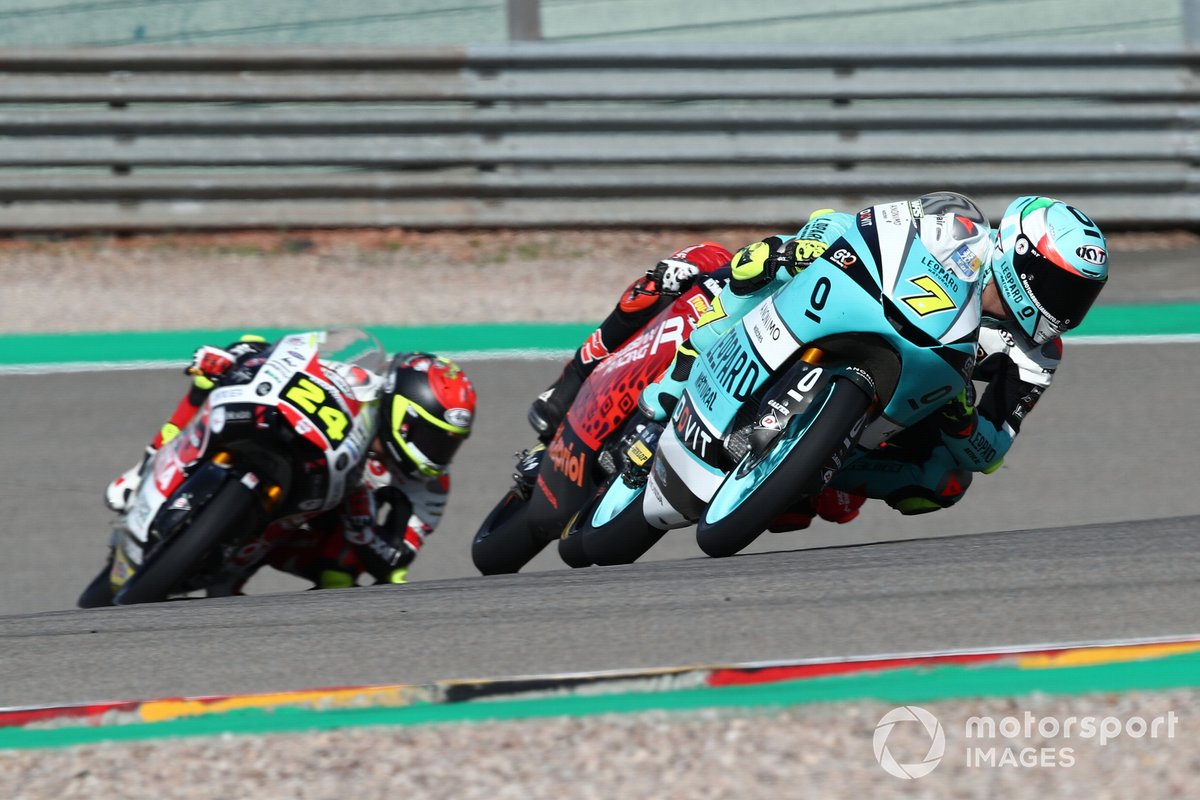 Acosta defended his line perfectly through the final corner to take the chequered flag 0.130 seconds clear of Toba.

Gresini’s Jeremy Alcoba took the chequered flag in third, but was demoted a place for exceeding track limits down the hill into Turn 12 to set up an aggressive pass on Aspar’s Sergio Garcia on the penultimate lap.

This promoted Foggia back up to third, dropping Alcoba to fourth ahead of the Snipers Honda of Andrea Migno.

Niccolo Antonelli was promoted to sixth after the chequered flag on his Avintia KTM after Garcia and Suzuki were hit with one-place penalties for exceeding track limits on the last lap.

Xavier Artigas was ninth on the sister Leopard bike ahead of the second Aspar GasGas machine of fellow rookie Izan Guevara.

McPhee was 11th in the end after getting caught up in an incident involving Romano Fenati (Max Racing KTM) and Tech3’s Deniz Oncu at Turn 1 in the latter stages, while Petronas Sprinta team-mate Darryn Binder salvaged 14th having been forced to serve a ride-through penalty for an incident in qualifying.

Poleman Salac pulled out at the end of lap 12 with a technical issue, while early podium challengers Jaume Masia (Ajo KTM), SIC58 rookie Lorenzo Fellon and Gresini’s Gabriel Rodrigo all had crashes.

Acosta’s championship lead now stands at 55 points over Garcia, meaning the Ajo rider will cannot be passed in the standings until the Austrian GP in mid-August.