Aspar’s Sergio Garcia won a chaotic Moto3 Catalan Grand Prix as the race was red-flagged at the end for a multi-rider collision.

Poleman Gabriel Rodrigo grabbed the holeshot on his Gresini Honda, though in typical Moto3 fashion the lead continued to change hands with almost every passing lap.

In the early stages Rodrigo, Aspar rookie Izan Guevara, his team-mate Garcia and the Petronas Sprinta duo of Darryn Binder and John McPhee all took stints heading the pack.

McPhee hit the front on lap four and stayed there until the start of lap seven, before working his way back to the head of the pack at Turn 1 at the start of the ninth tour.

The Scotsman held onto his lead at the start of lap 10, but crashed at the Turn 2 left-hander – his errant Honda somehow avoiding the pack behind, though Snipers’ Andrea Migno and SIC58’s Tatsuki Suzuki crashed trying to miss McPhee’s bike. 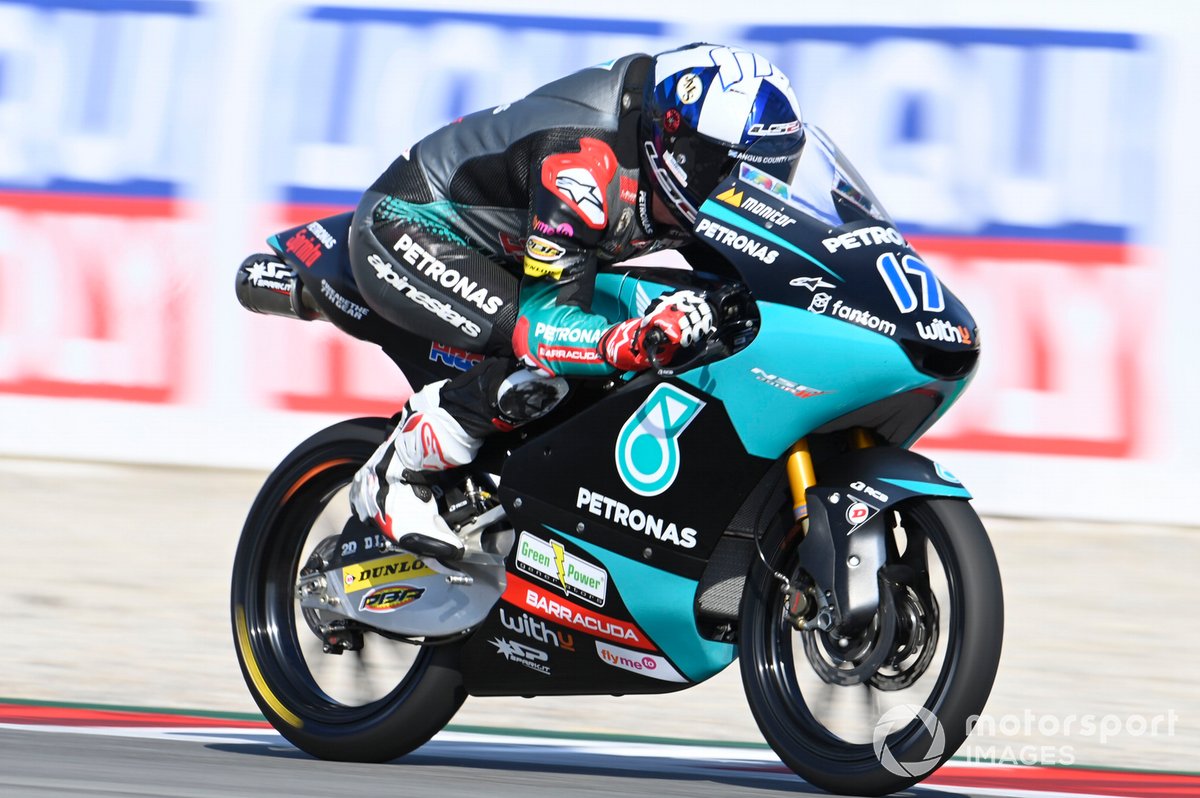 This released Guevara back into the lead, before Pedroa Acosta on his Ajo KTM hit the front for the first time at the start of lap 11 having qualified down in 25th.

The lead group stood at 15 riders with four laps to go, Acosta leading at the start of the tour but relinquishing it to Rodrigo at the Turn 4 right-hander when he ran slightly wide.

Rodrigo was able to put a few tenths between himself and Garcia behind, which kept him out of striking distance on the run to Turn 1 to start lap 19.

The Argentine didn’t have the same buffer next time around, dropping to ninth as Gresini team-mate Alcoba hit the front ahead of Acosta and Binder.

The top 15 all bunched up at the last corner as Alcoba backed off to stop himself being mugged in the slipstream, which led to the entire back spreading across the circuit on the run to Turn 1 for the final time.

Jaume Masia on the sister Ajo KTM emerged in front ahead of Garcia and Alcoba, with Garcia taking the lead into Turn 10 as Aspar team-mate Guevara crashed behind.

Garcia fended off Alcoba on the run to the chequered flag by 0.015 seconds for his and the new GASGAS brand’s second win of 2021, while Tech3 rider Oncu gets his first Moto3 podium following Masia’s demotion.

As soon as the leaders crossed the line the red flag was flown for a collision involving Tech3’s Ayumu Sasaki at Turn 8 and the Leopard duo of Dennis Foggia and Xavi Artigas.

Sasaki highsided in front of the Leopard duo and both had nowhere to go. Foggia and Artigas walked away unscathed, while Sasaki was reported as conscious.

Binder completed the top five ahead of Rodrigo, with Acosta seventh in the end – his championship lead cut to 39 by Garcia.

Kaito Toba on the CIP KTM and Stefano Nepa on the BOE Owlride KTM completed the top 10.