Garcia was denied Red Bull Ring victory last weekend when he crashed battling Pedro Acosta on the final lap, but found redemption in the Austrian GP when he carved past Oncu on the last tour to take his third win of the season.

Poleman Romano Fenati grabbed the holeshot at the start from Tech3 duo Oncu and Ayumu Sasaki, with Oncu moving into the lead at Turn 4 on the opening tour.

Fenati and Oncu traded the lead on the second lap up the hill at the Turn 3 right-hander, while championship leader Acosta worked his way into third ahead of Sasaki at Turn 9 on the same tour.

Acosta then took the lead at the start of the third lap, though would lose out at Turn 9 to both Fenati and Oncu.

Sasaki’s race would only last until the end of lap six when contact with Petronas Sprinta’s Darryn Binder sent him into retirement at Turn 10 – though the stewards felt the incident warranted no penalty. 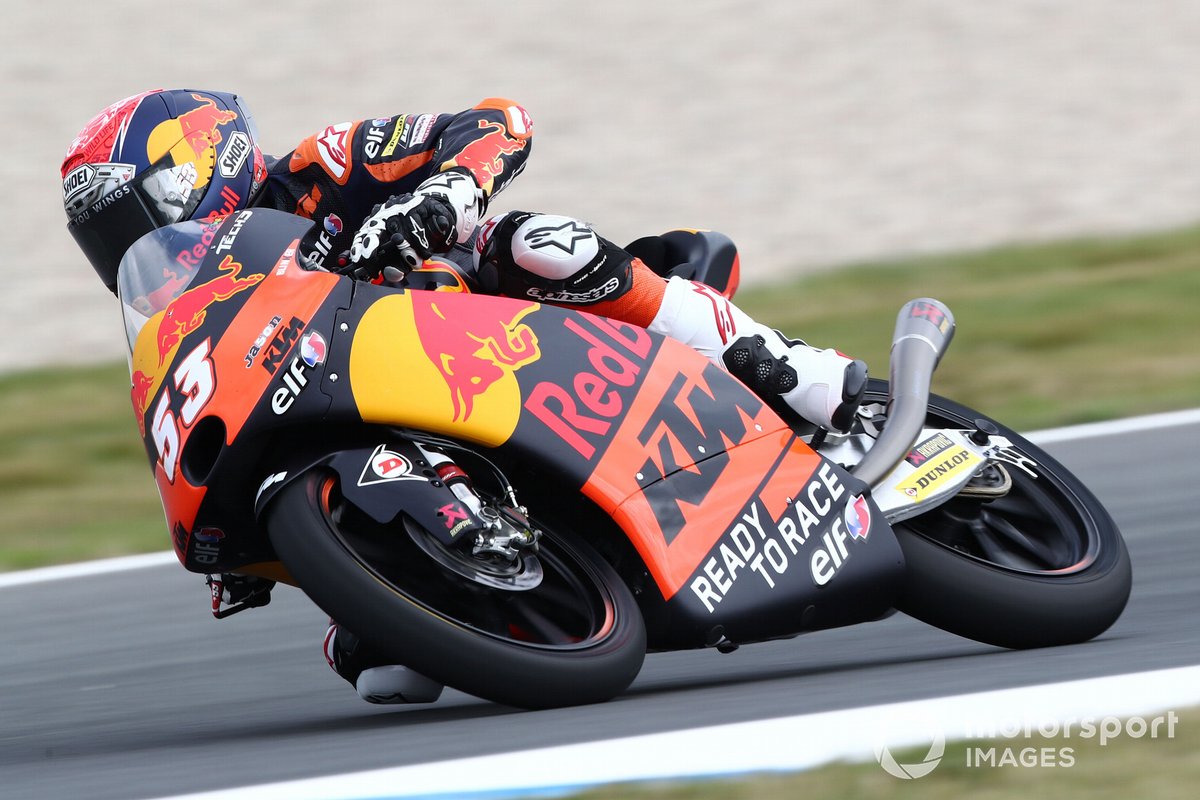 After this the lead group of six slightly edged away from the rest of the pack, Oncu, Jaume Masia, Ajo KTM team-mate Acosta, Fenati, Aspar’s Sergio Garcia and the Leopard Honda of Dennis Foggia all battling for the podium.

Across most of the 23-lap Austrian GP the lead changed hands between Fenati, Masia, Oncu and Acosta, with the battle for victory really heating up in the final three laps.

Garcia made the first big move at Turn 3 on lap 21 to take the lead, but immediately surrendered it to Acosta.

Come the end of the lap, Oncu had worked his way back to the head of the pack and would continue to lead onto the final lap.

Oncu covered his line through the first corner, but Acosta closed in up the hill into Turn 3 and outbraked the Turk – but Oncu deliberately took a wider line to get a better drive and retake the lead.

Acosta was then punished by Garcia at Turn 4, with the Ajo KTM rider almost highsiding as he got back on the throttle exiting the corner.

Garcia then set about attacking Oncu, pulling off a successful move at Turn 9 and defending his position through the final corner to win.

Foggia pipped Acosta to the final spot on the podium in third, while Fenati took the chequered flag in fifth ahead of Ajo KTM's Jaume Masia, Petronas Sprinta’s John McPhee and the sister Aspar GasGas of Izan Guevara.

Binder dropped to ninth on the final lap, with Kaito Toba completing the top 10 on his CIP KTM.

Garcia’s victory has now cut Acosta’s championship lead to 41 points heading to the British GP at the end of August.