Marc VDS' Lowes took his first win in four years last week at Le Mans following a late crash for long-time leader Jake Dixon, and once again benefited when Bezzecchi fell from the lead on the penultimate lap.

Bezzecchi jumped poleman Lowes off the line at the start to take the lead, while Petronas Sprinta's Dixon briefly moved ahead of his fellow Brit on the run to Turn 1.

But Dixon ran wide and allowed Lowes back into second, with Fabio Di Giannantonio moving into third on the Speed Up while his team-mate Jorge Navarro crashed after contact with Marcos Ramirez exiting Turn 1.

Di Giannantonio would capitalise on a slightly wide Lowes on the run into Turn 12 on the opening lap to take second, though the Marc VDS rider carved back through again at Turn 2 at the start of the second tour.

Bezzecchi's lead stood at half a second over Lowes and he maintained an advantage of around four to six tenths as he resisted the pressure exerted on him throughout much of the 21-lap contest.

His VR46 team-mate Marini crashed out on lap three at Turn 14, blowing the doors off this 2020 Moto2 title fight.

Di Giannantonio charged into second again on lap eight ahead of Lowes before taking the lead from Bezzecchi two tours later.

But the Speed Up rider's race lasted until lap 11, when he crashed at Turn 2, releasing Bezzecchi back into the lead.

Enea Bastianini came through from 12th on the grid to start hounding Ajo KTM's Jorge Martin for third in the latter stages, making his first move on lap 15 with a neat scythe up the inside of Turn 13. 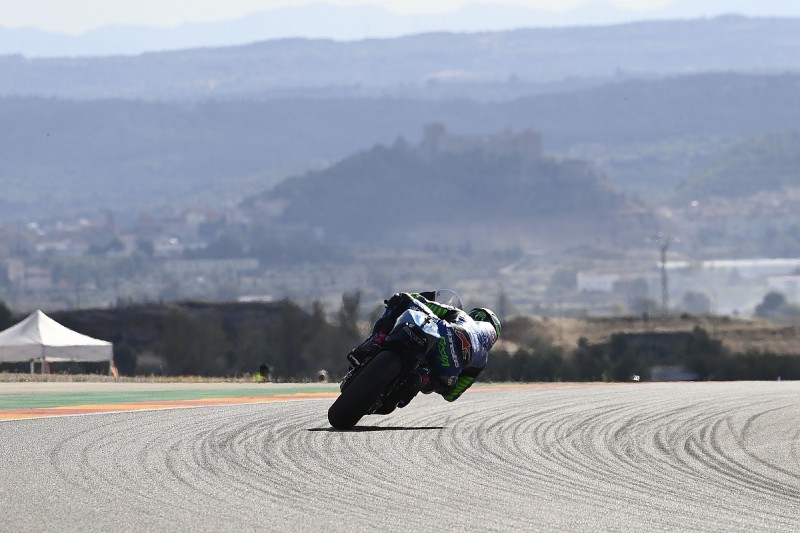 Martin retaliated at Turn 1, with Bastianini coming through again at Turn 8 and the pair continued to debate the spot, which allowed a gap of over three seconds to open up to the leading duo.

As the race entered its penultimate lap, Bezzecchi's lead over Lowes had extended to eight tenths and victory looked assured.

But the VR46 rider crashed at Turn 2 to compound his team's miserable Aragon GP.

Lowes kept it tidy to the chequered flag for his second win of 2020, while Bastianini got the better of Martin on the last lap for second to take the lead in the championship.

The MotoGP-bound Italtrans rider leads Lowes by two points in the standings, with Marini five adrift and Bezzecchi 25 down.

Dixon put the crushing disappointment of Le Mans behind him to claim a career-best fourth ahead of SAG's Remy Gardner, who prevailed in a tussle with American Racing's Ramirez.