The #7 Toyota of Mike Conway, Kamui Kobayashi and Jose Maria Lopez found redemption after years of heartbreak by finally winning the first Le Mans 24 Hours of the Hypercar era, while Ferrari beat Corvette in GTE Pro.

Conway started the #7 Toyota GR010 HYBRID's from the front at a wet start after Kobayashi had put the car on pole.

The Briton got away cleanly, while the #8 sister car of Sebastien Buemi was tagged by the #708 Glickenhaus 007 LMH of Oliver Pla.

In the #36 Alpine A480-Gibson, a grandfathered LMP1 car that ran last year as the Rebellion R-13, Nicolas Lapierre briefly took second but then lost it at Indianapolis, gifting Conway's Toyota a handsome early lead.

While the #8 car carved its way back up the field, the leading #7 Toyota enjoyed a trouble-free run and survived a chaotic night, which was marred by several accidents, particularly in LMP2.

Toyota restored a commanding 1-2 lead before one-third distance, with the #8 car getting back in contention for the win.

But problems with its fuel pickup began hampering the #8 car, restricting it to shorter stint lengths, while Buemi also lost a minute trying to reset the car on the side of the road.

The leading #7 car also suffered similar fuel issues, but Toyota managed to find a workaround and get both cars to the finish in a nervy final four hours.

An emotional Kobayashi took the chequered flag for the #7 crew, which finally found redemption after years of near misses at the Circuit de la Sarthe.

In 2017, Kobayashi and Conway - then partnered by Stephane Sarrazin - held a comfortable lead when they famously suffered a burnt-out clutch on pitlane, after Kobayashi mistook a thumbs up from LMP2 driver Vincent Capillaire for a marshal's go-signal.

When Toyota finally started winning in 2018, the first of now four consecutive Le Mans wins, it was the #8 car that took a hattrick of wins while Kobayashi, Conway and Lopez were left wondering if it was ever going to be their day.

That day, on the debut of the ACO's new Hypercar regulations, has now come, Kobayashi getting the honour to take the car to the chequered flag. 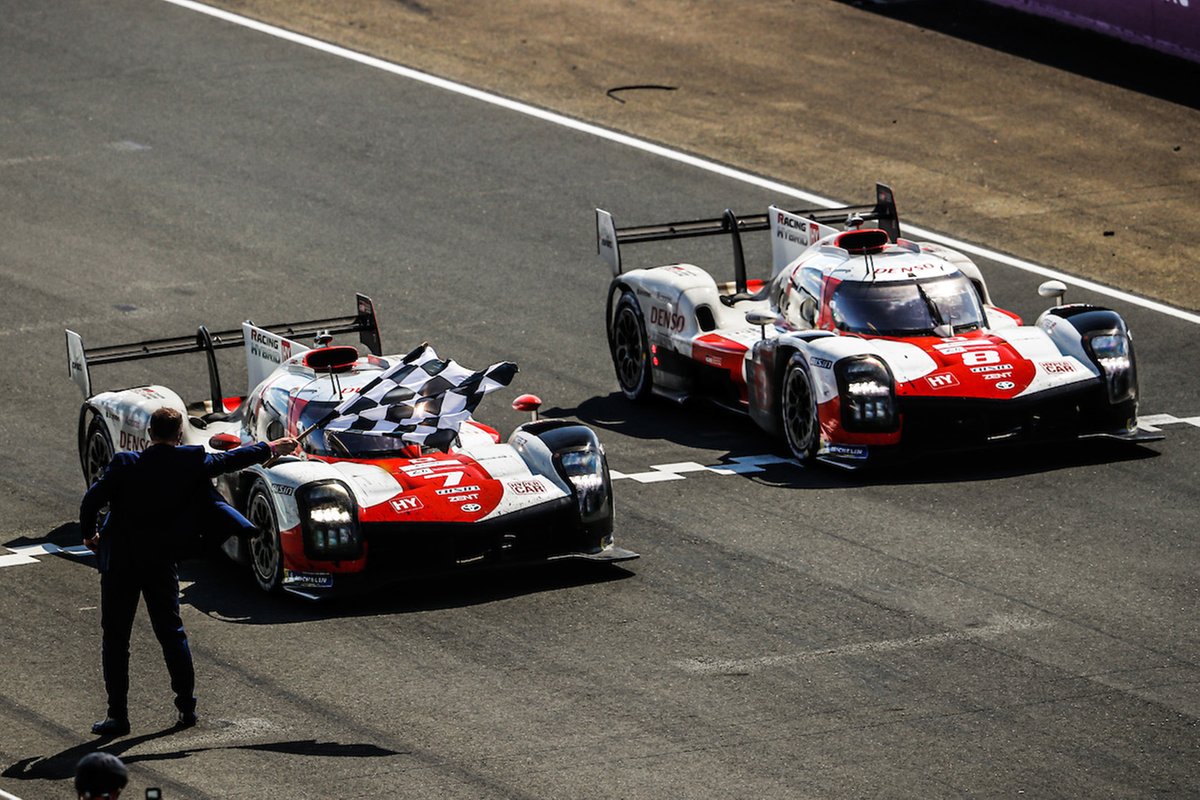 Buemi, Nakajima and Hartley completed another Toyota 1-2, Nakajima being held in the pits to orchestrate a photo finish, with Nakajima in the #8 Toyota finishing two laps down.

Lapierre crossed the line four laps behind the winners to give Alpine a first overall podium finish at Circuit de la Sarthe alongside Andre Negrao and Matthieu Vaxiviere, the first French team to finish on the overall podium since Peugeot in 2011.

After early drama, American boutique manufacturer Glickenhaus Racing had a low-key Le Mans debut in which it never threatened its fellow Hypercar rivals, but both of its cars made it to the finish in fourth and fifth, the #708 and #709 cars respectively four and seven laps behind.

In LMP2 the Belgian WRT outfit looked set to take a shock 1-2 win on its Le Mans debut. The team, led by Vincent Vosse expanded to WEC's LMP2 class after a decade of success in GT3 racing, entering a pair of ORECA-Gibson 07s.

On Sunday morning WRT emerged from the darkness in a comfortable 1-2 lead after an eventful night for many of its competitors.

At that time the #31 car of Robin Frijns, Charles Milesi and Ferdinand Habsburg enjoyed a 45s lead over the #41 sister car of Robert Kubica, Yifei Ye and Louis Deletraz, but in the afternoon the #41 crew closed the gap and took over the lead with less than two hours to go.

But on the final lap of the race the Yifei Ye sensationally ground to a halt in the leading #41 car, reportedly suffering a complete loss of power.

That handed the win to Frijns, Milesi and Habsburg, but only after holding off JOTA's resurgent #28 car of Stoffel Vandoorne, Tom Blomqvist and Sean Gelael who came back to finish just 0.7s behind at the finish. 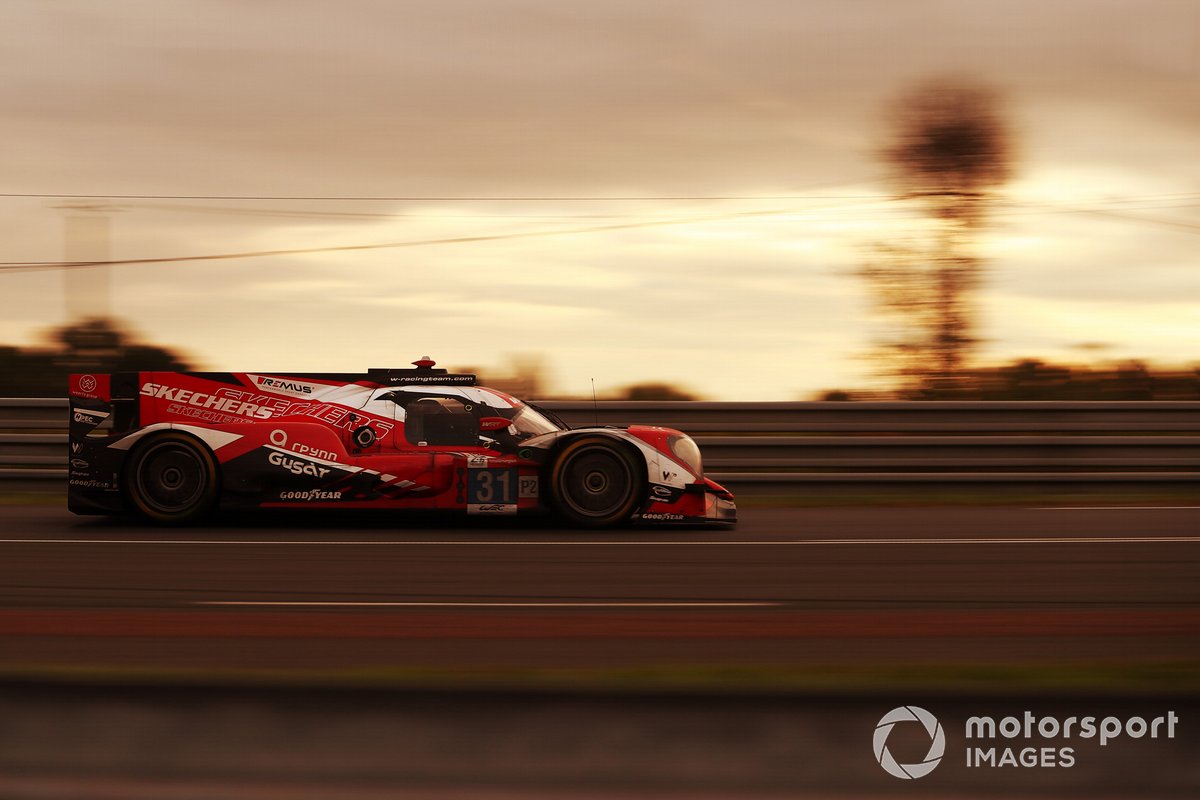 The #65 Panis Racing ORECA of Will Stevens, Julien Canal and James Allen ended up on the podium ahead of the #23 United Autosports car. It had completed fewer laps than the stricken #41 machine, but because the WRT car didn't cross the finish line it will be classified as a DNF.

While WRT fully earned its maiden win despite its late scare, it also benefitted from a plethora of issues and incidents that befell its competitors.

Some of the pre-race favourites already faltered on Saturday afternoon, Anthony Davidson going off at Turn 1 from the lead in the #38 JOTA after team-mate Antonio Felix da Costa had been the star of the opening hours.

G-Drive Racing's challenge fell apart after Franco Colapinto got caught out by a slow zone on the way to Porsche Curves, clattering his #26 Aurus-badged car into the #1 Richard Mille entry of Sophia Floersch. While the car eventually returned, its #25 sister car dropped out after a hard crash by Rui Andrade at the Dunlop chicane.

United Autosports' race also started unravelling on Saturday night when aboard the #32 car Manuel Maldonado lost control in the first corner and rammed team-mate Paul di Resta in the #23 entry.

United's third #22 car ran well up front until it disappeared into the garage for an alternator issue, just past the halfway mark.

Among the other contenders, IDEC Sport's race was stunted early on when Patrick Pilet got stuck the gravel in the #48 ORECA.

But a 90-second stop and hold penalty and a drivethrough penalty, respectively for jumping the safety car queue and crossing the white line on pit entry, dropped that car off the lead lap in fifth before it recovered to take second.

Juan Pablo Montoya and his DragonSpeed crew took the Pro-Am honours, the former F1 ace and Indy 500 champion winning the sub-class alongside Ben Hanley and Henrik Hedman in the #21 ORECA.

On their debut as a father and son duo, Kevin and Jan Magnussen finished 17th in LMP2. A puncture sent Magnussen senior into the wall in the #49 High Class ORECA, which they shared with fellow Dane Anders Fjordbach. 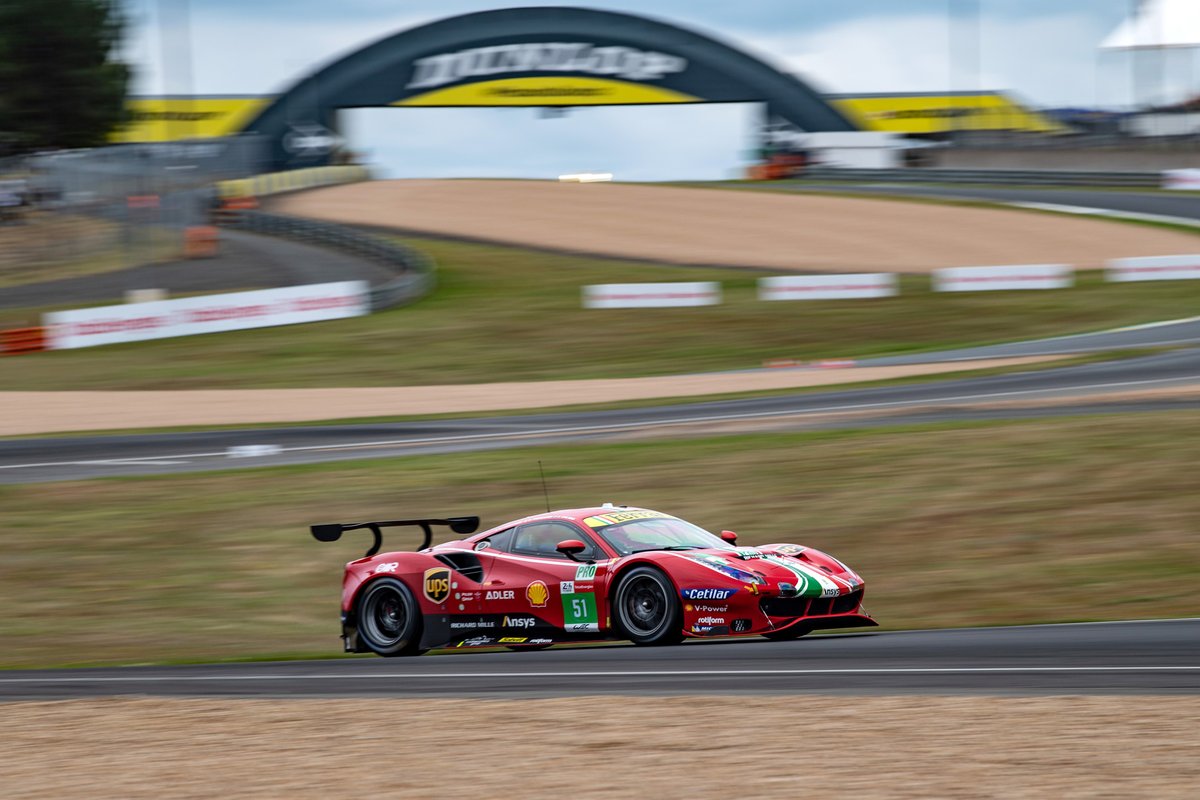 GTE Pro looked set to be dominated by the AF Corse Ferraris, but with great strategy and driving the #63 Corvette managed to stay in the mix as the conditions began to play to the debuting C8.R's strengths, Nicky Catsburg particularly enjoying the nighttime conditions during a fast triple stint.

A possible 1-2 win for AF Corse was thwarted by a left-rear suspension failure for the #52 car at night, which caused it to tumble down the order. On Sunday morning a delaminating puncture for Sam Bird cost the car even more ground.

That meant the race turned into a two-horse race between the #51 Ferrari 488 GTE Evo and the #63 Corvette C8.R.

In the warmer afternoon conditions, the #51 Ferrari of Alessandro Pier Guidi, James Calado and Come Ledogar gradually pulled away and took the entry's second win in three years, after winning in 2019 and finishing second last year.

It was the second GTE Pro win for Pier Guidi and Calado, who were also part of the winning crew in 2019, while Frenchman Ledogar took his first-ever Le Mans class win.

Porsche endured another character-building Le Mans, both the #92 and #91 factory cars losing ground early on and lacking the outright race pace to do much about it.

In the #92 Porsche 911 RSR-19, which was rebuilt on Friday after a shunt in Hyperpole, Kevin Estre, Neel Jani and Michael Christensen beat their team-mates in the #91 car to a distant podium berth, one lap down on the winning Ferrari.

Initially it was the Proton-run #79 WeatherTech car which led the Weissach marque's charge in the hands of Laurens Vanthoor and Earl Bamber, but the car retired overnight after a crash by third driver Cooper MacNeil damaged the chassis.

The other privately entered Porsche, the #72 HubAuto entry which Dries Vanthoor sensationally drove to pole, also had a troubled run. At the start Maxime Martin collided with a LMP2 car, a time loss from which the car never recovered. A broken drivetrain, which made the younger Vanthoor sibling grind to a halt, sealed the car's fate.

The second #64 Corvette bore the brunt of the reliability issues in its class. First it had to replace a broken diffuser after Nick Tandy was stunningly tapped from behind by Calado as the field left the ceremonial grid, before the race had even started.

It then lost over an hour with a clutch issue during the night and then disappeared into the garage a third time in the morning with an alternator problem. 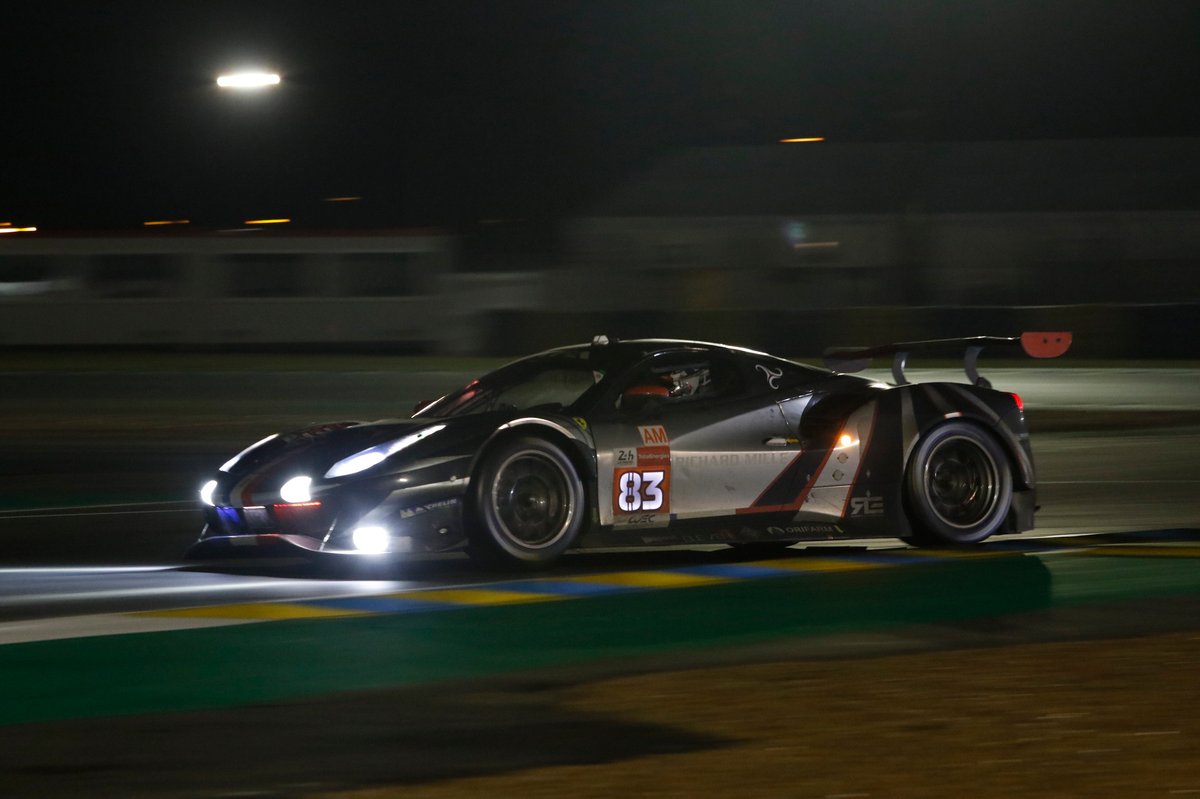 In GTE Am, the #83 AF Corse Ferrari proved the class of the field. It gained a healthy buffer after Felipe Fraga went off in the first chicane on Saturday night in what was then the class-leading #33 TF Sport Aston Martin.

Once in the lead, Nicklas Nielsen, Alessio Rovera and Francois Perrodo drove a controlled race to keep the Aston Martin over a minute behind at all times.

Trouble for the #54 AF Corse Ferrari gave the #80 Iron Lynx Ferrari of Matteo Cressoni, Rino Mastronardi and Callum Ilott a clear run to third in class.