WRT's LMP2 driver Robin Frijns revealed his Le Mans winning effort nearly unravelled at the end due to various issues, before taking the class win in a dramatic turnaround.

Frijns, who shared the winning #31 WRT ORECA-07 Gibson with Ferdinand Habsburg and Charles Milesi on the Belgian team's first Le Mans outing, came out of the night with a 45-second lead over the #41 sister car of Robert Kubica, Yifei Ye and Louis Deletraz.

But on Sunday the #41 car steadily closed the gap and took a commanding lead, only for Yifei to grind to a halt on the final lap of the race with suspected electrical issues.

That handed a shock win to Frijns, who narrowly managed to keep the #28 JOTA car of Tom Blomqvist at bay at the line.

Afterwards Frijns explained his car faced several issues in the final hours, which explains why its pace dropped off so dramatically compared to its rivals, as Blomqvist had been catching the Dutchman hand over fist.

"I think the team did an amazing job by basically leading both cars into the night and come out unscratched," Frijns said.

"The cars were both working really amazing, we had really good pace, a bit quicker than JOTA was my feeling, but then the last time I jumped in we suffered a big issue suddenly, the air jack died so we couldn't change the tyres.

"I had like new tyres in the front, old in the rear and vice versa again. So basically, everything went wrong in the last two hours. And I had no pace anymore because I think something broke on the car as well." 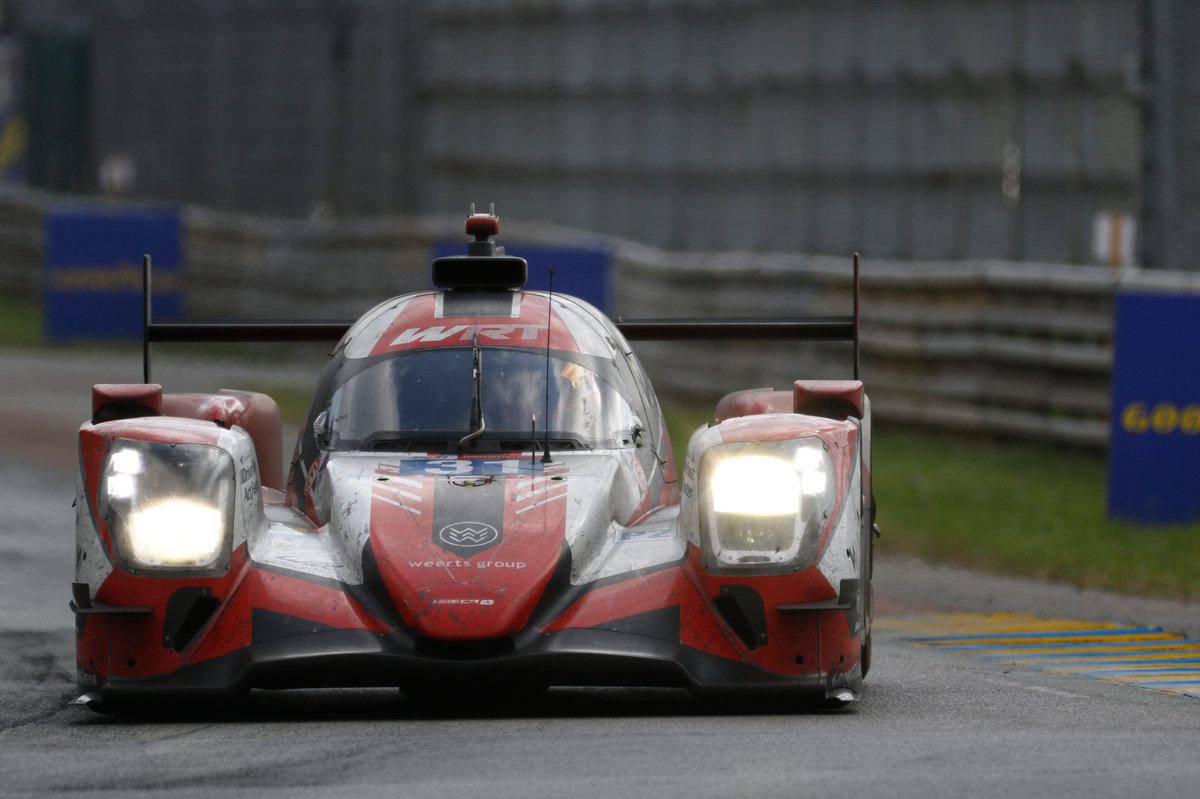 With Frijns struggling to bring his car to the finish, he said he was just trying his best to safeguard the team's sensational 1-2 win on its Le Mans debut.

Going into the final lap, his battle against Blomqvist suddenly became a fight for victory as he blew past the stricken sister car.

"The JOTA was catching very quickly, I think four or five seconds a lap," Frijns explains.

"I was securing my P2 because I was struggling with the car. But then heading into the last lap I heard on the radio that the sister car is basically breaking down and stopping and meanwhile, you're still fighting the car to secure your P2 but suddenly you're fighting for P1.

"So, it's a bit of a different load on your shoulders then, I have to say!"

Frijns only just managed to keep Blomqvist behind at the line, while the pair caught up with Toyotas' celebrating Hypercars and several slowing GT cars, which produced a hairy moment as Frijns had to swerve to avoid the flagman.

"I think the finish was as close as it gets in all ways," he added.

"Obviously, the two Toyotas were in front of me, and they were slowing down before the finish line for their photo.

"But the three, four cars behind them were all slowing down and I was still fighting for the win.

"I was trying to find my way around them, and I saw the chequered flag guy a bit late but luckily everything went well..."

On the other side of the WRT garage, Deletraz said he was lost for words and "crying" after being robbed of a Le Mans win with three minutes left.

"We had a big lead, we had the win, and the car stopped. I can't believe it.

"Winning Le Mans has been a dream of mine since I'm a kid... this one hurts but I will come back stronger."