Dirt track oval racing star Clauson was airlifted to hospital following an accident at Belleville High Banks in Kansas, with his family releasing a statement on Sunday saying he was "severely injured" and in a critical condition.

A statement from Clauson's family said: "Last night, the 7th of August, we said goodbye to our son, my fiance, our friend, Bryan Clauson.

"He was surrounded by family and friends and we were grateful that we could experience his final moments with him.

"Our Bryan fought to the end with the same desire that he demonstrated behind the wheel of all the various race cars he would park in victory lane.

"However, we were more proud of our Bryan that took a moment to make a young fan's day, or demonstrated his uncommon kindness and appreciation toward his friends, family and fans.

"We would like to thank everybody who has shown their concern toward us and kept us in their prayers. We will never be able to truly thank you.

"We would also like to thank the staff at Bryan Medical Center who stood and fought with our Bryan since he arrived here early yesterday morning.

"We know that our Bryan is also your Bryan and that you would like to participate in honouring him.

"A service will be held at the Indianapolis Motor Speedway at a date and time to be announced soon."

In a statement on behalf of USAC, Miller added: "It is with extreme sadness we must accept the death of Bryan Clauson.

"This is one of the darkest days in the 60 year history of USAC.

"We have lost one of our greatest champions and one of the greatest ambassadors in motorsports.

"Bryan was leading one of the more prestigious races on our schedule when the accident occurred.

"His passion for our sport was unparalleled. He was a leader on the track and in the pits.

"There is a tremendous hole in our community today as we grieve his loss with his family and friends."

Clauson was a major star in the American short-track oval racing scene, winning four USAC national championships and tasting success in major events including the Chilli Bowl, Turkey Night Grand Prix and the Belleville Nationals, where he was trying to retain his crown last weekend when he suffered his fatal crash.

After a foray into NASCAR's second tier that yielded one pole position and a best finish of fifth place from 26 starts with Chip Ganassi racing in 2007-08, Clauson prepared for an attempt to race in the Indy 500 with eight races in Indy Lights in 2011-12.

His Indy opportunity came around through a scholarship with USAC as part of a push by IndyCar to re-establish the 500's links to the short-track oval racing scene, with the hope that drivers and fans from that realm of racing would engage with the event again.

Of his three attempts at the famous race, this year's event marked his first finish, coming home 23rd with Jonathan Byrd's Racing. 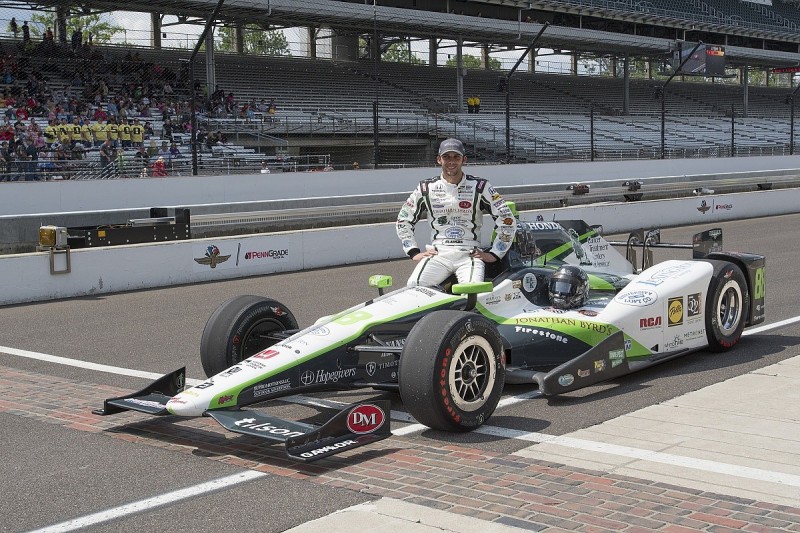 IndyCar CEO Mark Miles added: "This is certainly a sad day for the racing community as a whole, and on behalf of IndyCar and the Indianapolis Motor Speedway, we send our deepest condolences to the family of Bryan Clauson.

"Anybody who witnessed Bryan behind the wheel of a racecar can attest to his elite ability, relentlessness and unbridled willingness to race anything on wheels.

"While he'll be remembered most as a legend of short-track racing, his participation in the Indianapolis 500 exemplifies his fearlessness, true versatility as a competitor and the pure depth of his talent as a driver."

Dixon hits out at Castroneves after Mid-Ohio IndyCar collision

Grosjean pledges to “play the long game” on Indy 500 debut

Indy 500: Why does the winner drink milk? A tradition explained