The team, which has won titles in the IMSA SportsCar Championship and taken class podiums at the Le Mans 24 Hours, partnered with Honda-powered Rahal Letterman Lanigan Racing to run Servia in a one-off outing in its IndyCar debut at the 500.

Servia led 16 laps of the race after running an off-sequence fuel-stretching strategy before he fell away in the final laps to finish 17th.

The reduction in costs for the 2018 IndyCar season led to 10 one-off entries at the Indy 500, and new teams such as Carlin have joined the series this year.

"The Indy 500 is what everyone told me it would be and much more," Mattioli, pictured below with Servia, said. "There's no event quite like it.

"It is emotional. It's a great accomplishment for such a young team as Scuderia Corsa.

"Six years ago, we started the operation. We did quite OK in the GT field and now stepping into open-wheel [racing] is very, very exciting. 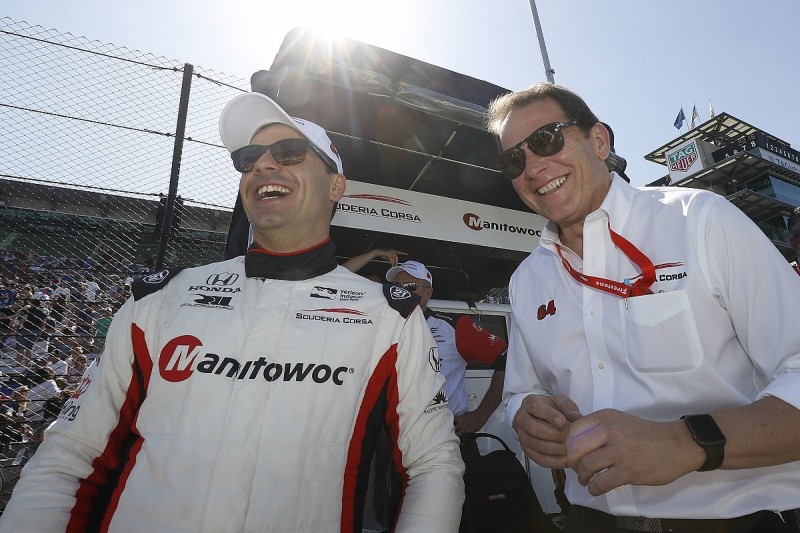 "We're really looking forward to developing a full-season [programme] for next year. For this year, this is all we have.

"Then we will digest everything and work hard for next year, possibly a full-time entry.

"It's the beginning of the journey."

Servia told Autosport he would be keen to return to the Indy 500 with Scuderia Corsa for 2019 - and the team plans to enter the race again even if its full-season plans don't come together.

"Last year I elevated my game, and this year is back up there," he said. "So, I absolutely want to do it again with Scuderia Corsa and RLL.

"It was great, we liked each other, and everyone on the team now feels that we can do it.

"I hope I made a statement that we can win this, and if it's just the one race we do together, then at least next year we go into it properly prepared with all the experience from this year."

Scuderia Corsa is not the only team working on a full-time IndyCar entry, with Dreyer & Reinbold Racing also exploring the opportunity.

McLaren has also been linked to an IndyCar programme for 2019, as Autosport revealed last month.

Why IndyCar stars crashed out of the Indy 500 - video