Marco Andretti claimed his first pole position since Pocono 2013 for the opening race of IndyCar's Detroit double-header, beating Robert Wickens by almost half a second

In a truncated qualifying format unique to the double-header in Detroit, the field was split into two groups. The fastest driver overall from the two sessions takes pole position, while those behind in his group fill the odd numbered grid slots. The slower group take the even positions.

Andretti, who ran in the session's second group, held provisional pole after the first of two laps on his final run, before Schmidt Peterson Motorsports' Wickens edged the Andretti Autosport driver by 0.0019s with his last lap of the session.

However, Andretti went quicker still on his final lap, positing a time of 1m14.8514s to put himself 0.4752s clear of Wickens and end his lengthy pole drought.

Having been the pacesetter in the first group, Chip Ganassi Racing's Scott Dixon will line-up second on the grid, with Wickens third.

Andretti's team-mate Alexander Rossi was 0.0760s behind Dixon in the first group and starts fourth, with the third Andretti Autosport car of Ryan Hunter-Reay, fastest in Friday's practice, one place further back.

Indy 500 winner Will Power topped the timesheets early on in the session's opening group as the fastest driver on the primary tyre, but struggled on the crucial option tyre during the final laps of the session and will start sixth.

Graham Rahal, who won both Detroit races in 2017, echoed Power's issues and will start eighth. He was beaten to seventh by Rahal Letterman Lanigan Racing team-mate Takuma Sato. 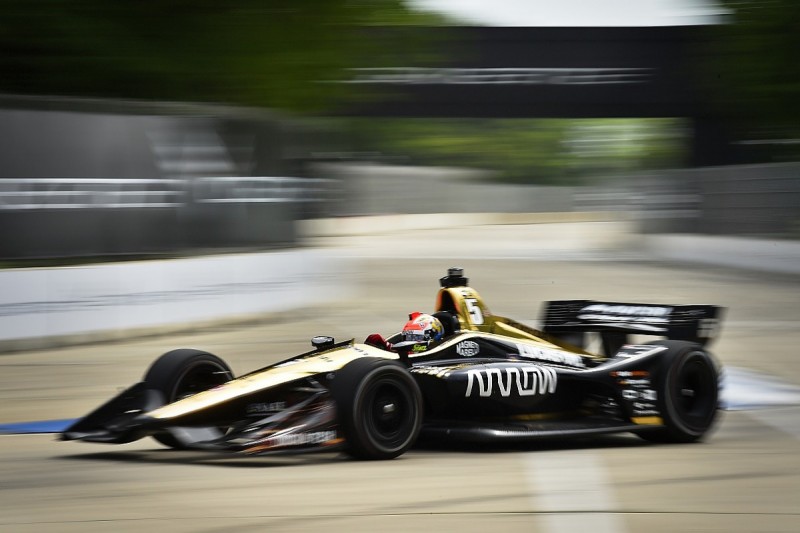 James Hinchcliffe, who missed the 500 after he bumped from the field, and Max Chilton will round out the top 10 on the fifth row of the grid.

Chilton was one of the drivers to improve significantly late in the first group and equals Carlin's best qualifying performance of the season so far, set by Charlie Kimball at Long Beach.