Rossi, after a poor start from the front row, was drafted down to Turn 2 by Andretti Autosport team-mate Ryan Hunter-Reay on the inside and the Rahal Letterman Lanigan Racing driver Sato on the outside, when Sato appeared to squeeze down on Rossi.

The resultant collision eliminated all three and also caught up James Hinchcliffe and Felix Rosenqvist - whose Ganassi Dallara-Honda was spat up into the debris fence and rode along the retaining wall.

A year ago at Pocono Wickens went flying into the fencing in an early collision and sustained severe injuries that have currently halted his racing career.

"I can't even begin to understand after last year how Takuma thinks any sort of driving like that is acceptable," Rossi told NBCSN.

"To turn across two cars at that speed at that corner, in a 500-mile race, is disgraceful and upsetting. It might have cost me this championship."

Hunter-Reay, who Wickens had been trying to pass in the 2018 accident, shared Rossi's shock at Sato's driving.

"My view is that it was ridiculous," said Hunter-Reay.

"I thank God everyone is alright. I thought we learned our lesson from last year. Lap one of a 500-mile race...

"From my perspective, I had a nice, clean run on Rossi, I was almost three quarters of the way alongside, and all of sudden, out of nowhere, I'm backwards and I'm seeing the rest of the field coming as I'm backing into it. Then I saw Felix go up into the fence." 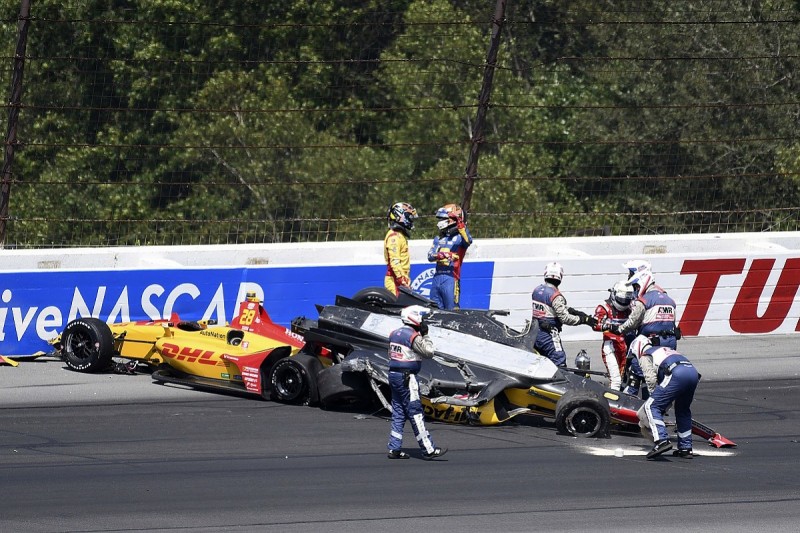 Hinchcliffe, Wickens' Schmidt Peterson team-mate last year, said he had deliberately backed out of a similar situation to the one that led to Sunday's crash moments earlier.

"We were heading into Turn 2 kind of three-wide, and I knew that wasn't a good idea, so I backed out," said Hinchcliffe.

"It's a 500-mile race, I don't know how many times we have to do this before people figure out that you can attack all you want, but it doesn't give you a chance to win if you are in the fence."

Sato said he was "sorry for all the guys fighting for the championship" and that he "thought it was all clear" when he moved down the track.

He also argued that the 'seams' in the track surface and how they impacted the racing lines were a contributory factor - a point that Rossi disagreed with in a subsequent social media exchange between them.

"All the seams also are putting the car really easy to get the lane change and everybody gets close," said Sato.

Rosenqvist was taken to hospital for further evaluation after the crash, and later released unhurt bar what he described as "minor back pain and some headache".

He added: "Hopefully I should be back to normal in a couple of days. A big thanks to the IndyCar track staff and medical staff, they did an awesome job looking after everything.

"Luckily the other drivers are OK as well, I think that's the main thing."