Alexander Rossi, who enters the weekend second in the championship standings, led team-mate Ryan Hunter-Reay after the first of two flying laps in the 'Fast Six'.

Penske's Newgarden and Power opted to run on the slower black compound tyres for their first run in order to slightly wear the tyres for Sunday's race and help a three-stop strategy - regarding as the quickest tactic.

But once the duo had fitted the quicker red compound tyres, Power went top of the times briefly before Newgarden's 1m43.2026s lap beat him by 0.0482 seconds.

Hunter-Reay deposed Rossi for third at the flag as Andretti locked out the second row of the grid.

Schmidt Peterson Motorsports driver Robert Wickens qualified fifth ahead of Sebastien Bourdais, who opted to head out first and lap on a clear track.

That meant he lost a provisional pole position after the first flying laps as late improvements bumped his Dale Coyne Racing entry run in conjunction with Vasser-Sullivan down the order. 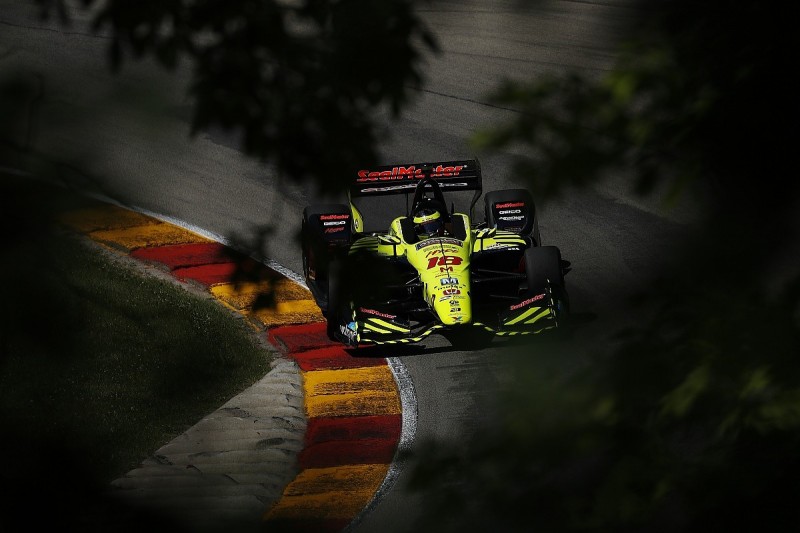 Sato's team-mate Graham Rahal was ninth ahead of Spencer Pigot.

Simon Pagenaud blamed an increase in temperature for narrowly missing out on the top 12 segment of qualifying, and he will start 14th ahead of Marco Andretti.

SPM's pace had impressed in Road America practice but while Wickens made the top five, team-mate James Hinchcliffe was only 15th in qualifying.

Charlie Kimball and Max Chilton were 19th and 22nd after Carlin had enjoyed an upturn in form in recent weeks.