Newgarden ended the race in a three-way fight between himself, Ryan Hunter-Reay and Scott Dixon after the final round of a conventional three-stop strategy for the leaders.

Dixon vaulted himself into contention by running a lap longer in the opening stint, climbing from eighth on the grid into the leading pack when the varying strategies shook out.

He inherited third when Alexander Rossi, who entered the race second in the standings, was forced into the pits with an apparent right-rear tyre problem that cost him swathes of time and dropped him to 17th.

Dixon then ensured he would fight for the win when he came into the pits one lap earlier than Newgarden and Hunter-Reay ahead of the final splash-and-dash stops.

That meant when Newgarden edged Hunter-Reay coming out of pitroad, Dixon was able to aggressively close the gap to second and attempt to make the most of the Andretti driver's colder tyres.

Their duel for second allowed Newgarden to further strengthen his lead and sail to victory, as Hunter-Reay resisted Dixon for second place.

Penske locked out the front row of the grid but Indianapolis 500 winner Will Power instantly lost power at the start and dropped to the rear of the field. He would add one more lap before retiring with an engine problem.

Takuma Sato was fourth despite losing several places at the midpoint of the race when Rossi forced him onto the grass at the exit of the tight left-hand Turn 8. 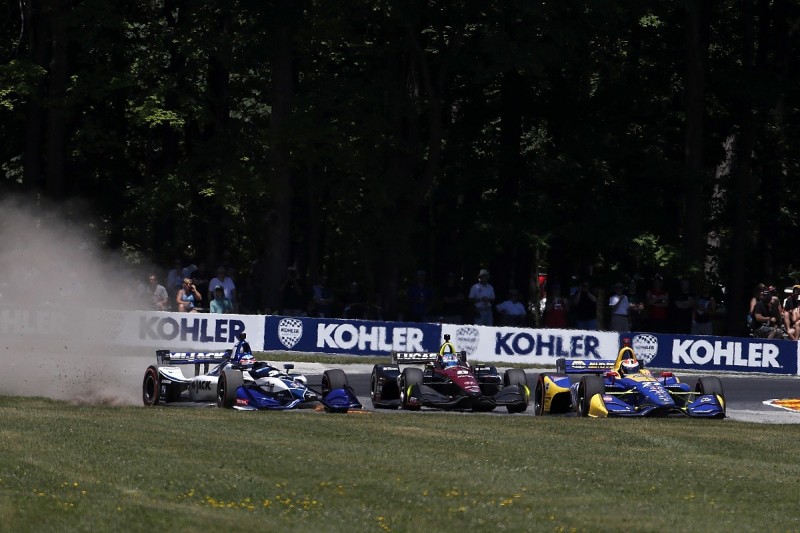 He then moved to fourth after Rossi's problems, having previously picked off rookie Robert Wickens, who lacked top speed on Road America's long straights.

Wickens would hold onto fifth ahead of Sato's team-mate Graham Rahal and Simon Pagenaud finished in seventh, having been forced into a recovery drive from 14th having missed the 'Fast 12' on Saturday by three-thousandths of a second.

That meant Spencer Pigot was eighth as he missed out on his best IndyCar result of the 2018 season by one place.

Ganassi's Ed Jones and James Hinchcliffe rounded out the top 10, ahead of Marco Andretti and Jordan King, who had fallen back after a blistering start to the race in which he made 12 overtakes in the first three laps.

Sebastien Bourdais fell out of contention early in the race when an early stop from fifth place - suggesting he was going for a four-stop strategy - was compromised by an engine stall.

Bourdais ended the day in 13th ahead of AJ Foyt Racing duo Tony Kanaan and Matheus Leist in their first race since being confirmed at the team for 2019.