The Penske driver looked to be in the clear after the alternative strategy of Wickens had failed.

Power had opted to change to the slower, black compound tyres on his second stop, while Wickens bolted on another set of red tyres.

That meant Wickens would have to use the primary black tyres later in the race, meaning that his early pass of Power following the stop was not detrimental.

Wickens had managed to build a gap sufficiently big enough to marginally cover off Power when he finally switched to the primary tyres and exited the pitlane ahead of the Penske driver.

But with Power on the quicker red tyres, he dispatched SPM driver Wickens early into the stint to take the lead after the halfway point of the race.

Yet his victory was made all the more difficult when Newgarden made a failed pass on Dale Coyne Racing's Sebastien Bourdais at Turn 1 as he locked up under braking and hit the inside kerb, spinning off and stalling his car's engine.

That prompted a final dash into the pits that should have aided Wickens, handing him a free stop onto red tyres with fuel to the finish - matching Power and the rest of the field.

But a challenge never materialised from the fading Wickens, who struggled with fuel saving, as Dixon took over the role of challenger. 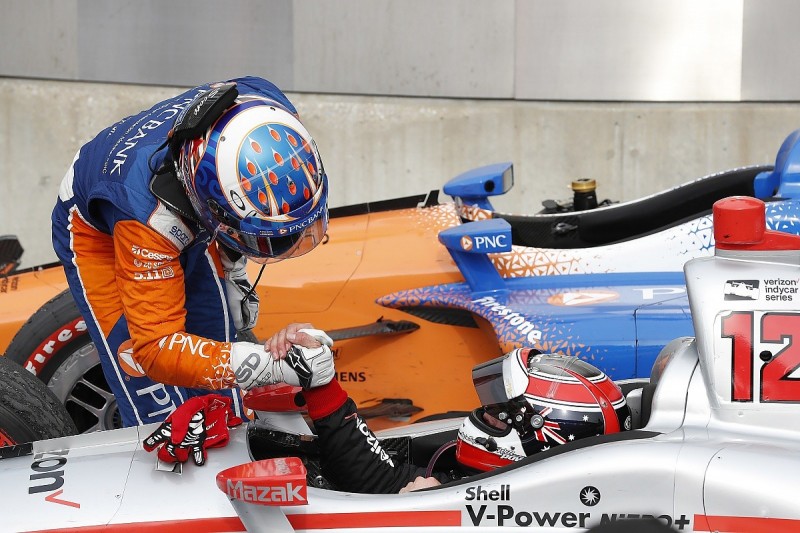 A stunning drive from Dixon elevated him into second when he blasted past Wickens on the run to Turn 1 not long after the stops.

Dixon had struggled throughout the weekend, starting 18th, and opted to go for an unconventional strategy that included an early, extra stop.

But using clean air and red tyres earlier in the race meant he made up places in traffic to run sixth and used the late caution to jump his rivals.

In the end, Dixon was unable to challenge Power for the win and Wickens settled for third.

Bourdais ended the day fourth and his role in Newgarden's off was perfect for the Penske driver's title rival, fifth-placed Alexander Rossi.

Helio Castroneves made an impressive return to IndyCar competition with a run to sixth, ahead of SP's James Hinchcliffe.

Simon Pagenaud was eighth for Penske, after a lap-one run into the gravel after Castroneves had forced him into Jordan King and off the track.

Graham Rahal, like Dixon, was boosted by his alternate strategy and the late caution to end the day ninth for Rahal Letterman Lanigan Racing.

Takuma Sato began his Month of May ahead of an Indianapolis 500 defence with 10th, ahead of the recovering Newgarden.