Wickens had looked set to finish runner-up to Power after he delayed using the slower black compound tyres, but was handed a reprieve when Josef Newgarden's failed move on Sebastien Bourdais caused a caution.

The entire field pitted under the caution, opening up a 24-lap dash to the flag - marginally more than an average estimated stint length.

Power was able to fuel-save sufficiently to stay well ahead of Wickens, who then faded to third behind Chip Ganassi Racing's Scott Dixon who used an alternative strategy and superior fuel saving to jump ahead.

Wickens, who started his first IndyCar race from pole and has scored two podiums so far this season, said the late race situation was the first time he felt inexperienced.

"That was the first race where I kind of felt like a true rookie in that final stint because I've never had to save fuel before," he said.

"We've kind of practiced it a little bit in warm-up where you do one lap of fuel save.

"But the amount of fuel that we were having to save to make that work was something that I didn't even think was possible.

"It was tough and, running in second, I was told the number I needed to achieve, and then I just thought, 'OK, well, Scott is on push-to-pass, so I don't know if I should use it to keep him behind or if I should hit my number'.

"We were actually having an issue with my push-to-pass all day, so it wasn't quite working to the best that it could." 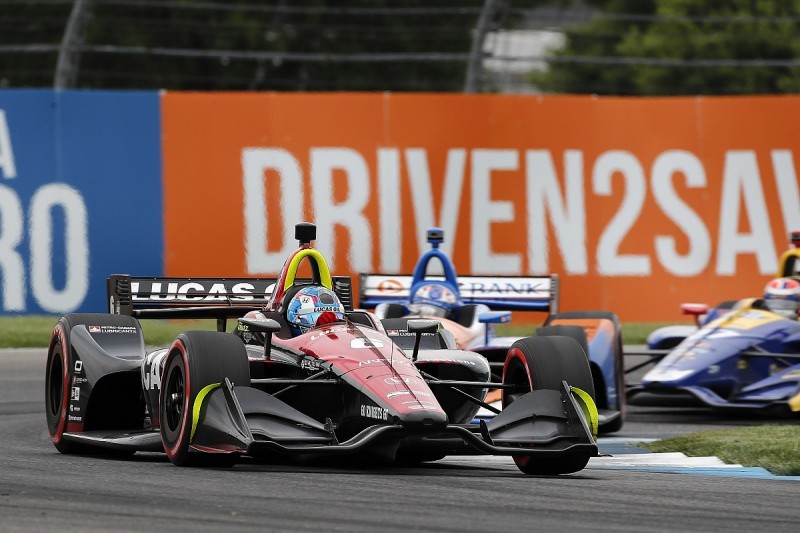 Wickens also added that his DTM experience was only helping him so much.

"I think racing in DTM in the past, it's gotten me prepared for a lot of stuff here in IndyCar, but the races here are surprisingly long," he said.

"I've definitely carried over some of my stuff from DTM to here, but there's still so many things that I'm learning as I go.

"It's all a work in progress, but as I get done here I'm going to talk to the engineers about how I can save fuel better because that's the only thing I can think about right now."