The 'Fast Nine' pole shootout ran straight after the shock events of the last row-setting session in which Fernando Alonso and McLaren were bumped out of the field by Kyle Kaiser and the minnow Juncos Racing team.

Had the rain that delayed proceedings on Sunday continued, the first three rows of the grid would have been set on Saturday speeds, which would have meant Ed Carpenter Racing's Spencer Pigot taking his first IndyCar pole at the Indy 500.

That was beaten by Pagenaud's incredibly consistent run, in which he only dipped below 230mph with his final lap and ended up with an average of 229.992mph.

Pagenaud, who is yet to finish above sixth in the Indy 500 during his career, was comfortably faster than the other two Penske drivers in the pole session - as his team-mates Will Power, last year's winner, and Josef Newgarden ended up only sixth and eighth.

Pigot was last to run having set the pace on Saturday, and his early speed suggested he might be able to deny Pagenaud. 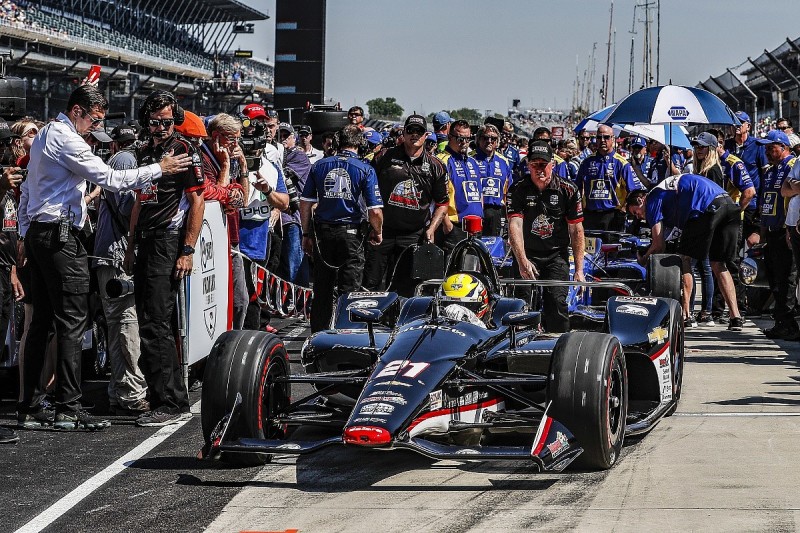 But he faded across his run and ended up having to settle for the final front row spot, as he dropped to third behind Pagenaud and Carpenter.

ECR effectively has three cars in the top four, with Ed Jones qualifying its entry in association with Scuderia Corsa in fourth.

Austin race winner Colton Herta continued to star in his rookie IndyCar season by ending qualifying for his first Indy 500 as the highest placed Honda entrant.

The other two Honda runners in the final session were Dale Coyne Racing with Vasser-Sullivan driver Sebastien Bourdais in seventh and Andretti Autosport's 2016 Indy 500 winner Alexander Rossi, who was slowest of the pole group in ninth.

The rain meant the loss of the planned open practice session that was due to follow pole qualifying had it run in its intended early afternoon slot.

That means the next time the drivers will take to the track will be in Friday's traditional 'Carb Day' final practice.