Alexander Rossi executed a perfect two-stop race to take his second IndyCar victory of the season at Mid-Ohio, with the Andretti Autosport driver being the sole exponent of the strategy

From pole position, Rossi led comfortably throughout the opening stint from Penske's Will Power.

While the majority of the field pitted for the first time between laps 15 and 23 of the 90-lap distance, Rossi's intention became clear as he stayed out.

Pitting for the harder black Firestones on at precisely one-third distance, Rossi emerged down in fifth place, just holding onto position after a side-by-side battle with championship leader Scott Dixon.

The Canadian made his own second stop after beginning to lose time 10 laps later, as Power took over the lead of the race during the second stop cycle for the three-stoppers.

After returning to the lead, Rossi held a 20-second advantage over Wickens until his second and final stop for black tyres came exactly two-thirds of the way through the race.

Wickens then dived in from the lead for his third stop six laps later, leaving Rossi to ease to his first win since Long Beach with a 12.8s margin over the SPM driver.

Though Rossi ended up dominant, there was a huge amount of wheel-to-wheel racing in the pack.

Power and Penske team-mate Josef Newgarden nearly crashed into each other after the Indianapolis 500 winner had made a stop for red tyres, but the reigning champion muscled up the inside successfully to take the spot.

By at the end of the next stop cycle, Power had got ahead of the #1 Penske, to take the final spot on the podium, three seconds clear of team-mate Newgarden - who had also dived past Rossi briefly early in the race in traffic but then immediately made his first pitstop.

Five-time Lexington winner Dixon, from ninth on the grid after being caught out by red-flags in qualifying, rose to fifth by the time of the chequered flag.

The Chip Ganassi Racing driver never really threatened a podium spot and had his championship lead reduced to 46 points by race winner Rossi. 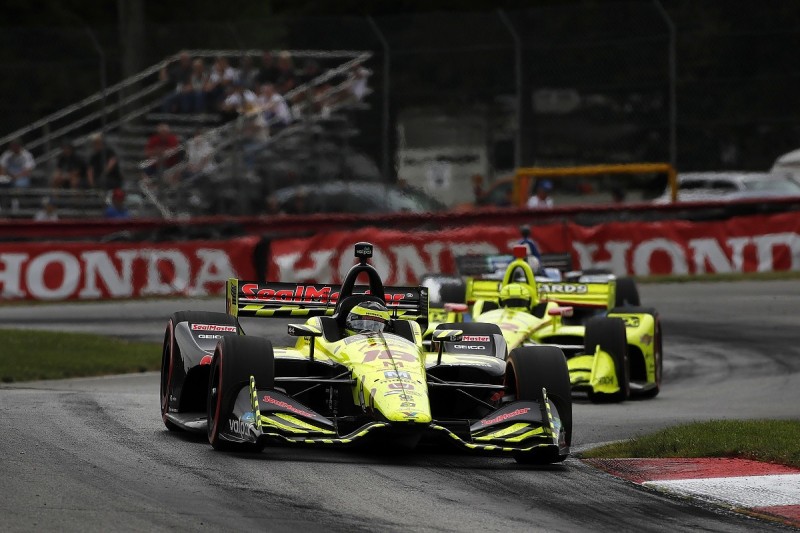 Star of the race was Dale Coyne Racing with Vasser-Sullivan's Sebastien Bourdais. Having started last following a brake-related accident in qualifying, he charged to sixth, just over a second behind Dixon.

Mirroring Dixon's strategy, Bourdais scythed through the field despite the race featuring no caution periods.

Rossi's Andretti team-mate Ryan Hunter-Reay was the big loser, slipping to seventh. The #28 Honda-powered car had started in third place and looked strong at times.

But as most of the other three-stoppers at the head of the field fitted soft red tyres at their final stops, the 2012 champion had blacks fitted and had to settle for fending off Penske's Simon Pagenaud for seventh.

Following his first appearance of the season in the 'Fast Six' in qualifying, Carlin's Max Chilton endured a frustrating afternoon.

He hit Takuma Sato in the opening laps and picked up a drive-through penalty for spinning the RLLR driver.

Switching strategy, Chilton then suffered a front-left wheel problem that hampered his race and came home 24th and last, two laps down.