Fittipaldi has been sidelined for around two months with leg injuries sustained in a qualifying crash at the Spa World Endurance Championship opener last week.

Legge's last IndyCar appearance was an Indy 500 one-off with Schmidt Peterson Motorsports in 2013, and her main '18 campaign is with Michael Shank Racing's Acura team in the IMSA SportsCar Championship's GTD class.

"Obviously, first of all, it's unfortunate how the ride became available," Legge told Autosport.

"Pietro's a really good driver and those injuries are horrible. It's sad for him - and sad for the 500 to not have the Fittipaldi name there again.

"But I'm a racer and I believe I could do a good job for Dale, and would love the opportunity to prove it."

Coyne incumbent Sebastien Bourdais was a pole position contender at Indy last year until being injured in a qualifying crash, while team-mate Ed Jones went on to finish third.

"I feel it's going to be a competitive seat," Legge said.

"There's the results at Indy last year, but also the fact that as a whole, Dale's team has just moved onto a whole new level. Craig Hampson and Michael Cannon are great engineers - two of the best, actually.

"And then there's the fact that it's Honda power. As I'm an Acura racer in IMSA, it would be nice to continue the relationship with the HPD family. We have a strong relationship.

"So I've had people reach out to Dale and he is looking for some funding, so we're seeing what we can come up with to try and be on the grid this year.

"I know there's a number of drivers in contention for this ride and Dale's been inundated with calls, but I think a couple of my partners could help make this happen.

"The feedback has been pretty positive - although nothing's done yet."

Legge, who finished third in the 2005 Atlantic Championship, spent two years in Champ Car, the second of which was with Coyne. 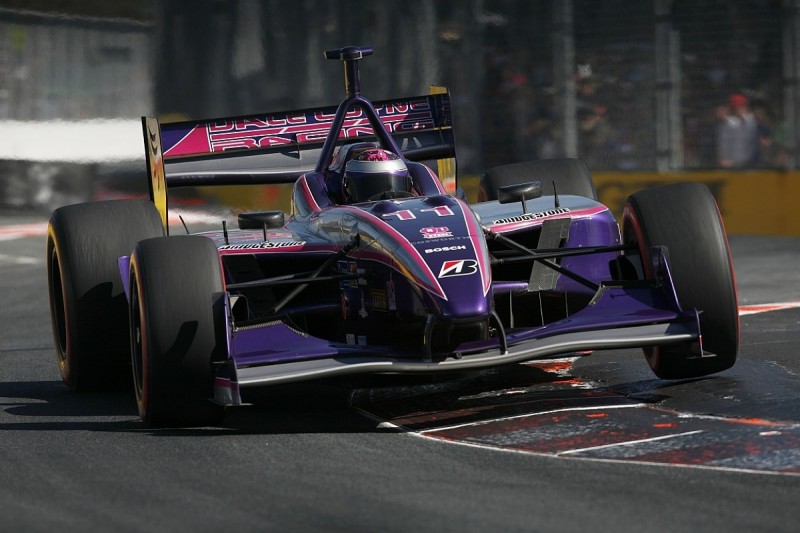 She missed out on a seat when Champ Car and the Indy Racing League merged for 2008, but after a three-year DTM spell she competed for Dragon Racing in IndyCar in 2012.

Aside from the following year's Indy 500 appearance, she has since concentrated on sportscars with first the DeltaWing project and now Shank.

Legge is confident her long absence from single-seaters will not be a hindrance.

"I'd have a lot more testing than the last time I stepped in," she said.

Coyne confirmed to Autosport that Legge is a contender for the seat, although the bank holiday in the UK meant that his talks with sponsor PaySafe, a British company, had been delayed 24 hours.

Paysafe-backed Zachary Clemen de Melo is sharing the second DCR seat with Fittipaldi this season, but Indy was not part of his original programme.