Sebastien Bourdais says IndyCar race control's decisions forced him to race "idiots" at the rear of the field at Long Beach, ruining his weekend

The Dale Coyne Racing driver started ninth but had briefly moved into the lead by lap 56 of 85 before his team-mate Zachary Claman de Melo crashed at Turn 8 and caused a full-course caution.

That came after Bourdais had been instructed to give second back to Scott Dixon - who he quickly repassed - following an overtake on the Chip Ganassi Racing driver and two lapped cars that included the Frenchman using the pitlane exit.

Bourdais' race was then compounded when he pitted following another full-course caution late on only to find the pits were closed.

He was waved through by his team and stopped the following lap, and was later spun to the back of the cars on the lead lap after a hit from rookie Jordan King.

Bourdais, who was classified 13th, believes those factors forced him to race "idiots".

"It was such a frustrating day," he said. "[It was] full attack, really good car.

"Unfortunately, as a group, we [he and Dixon] took a chance to stay out too long and then it went yellow.

"Race control could have waited a couple [of] seconds before closing the pits, but they didn't and we went to the back where we had to race idiots.

"I was racing [Carlin's Charlie] Kimball side-by-side and he gives me no room, and he bent both of my toe links on the right side.

"It was pretty much game over from there. I made a mistake because of it trying to pass him again later into Turn 9. The car wouldn't turn anymore.

"Then, in the next corner, Jordan King felt like a hero and took us out.

"After that, I had to deal with another idiot, Matheus Leist, who tried to crash both of us a couple of times.

"There really wasn't much to salvage after that. It's really disappointing.

"The car was good. I drove the wheels off it. Passed a bunch of guys and we have nothing to show for it." 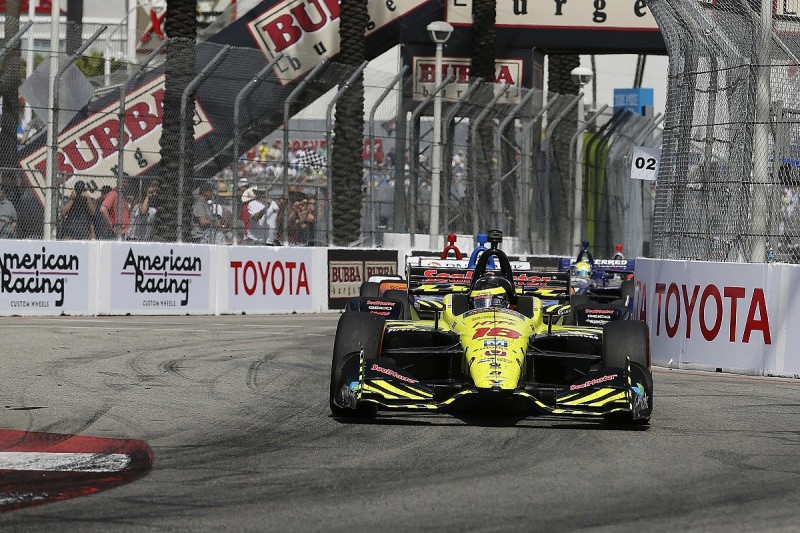 Bourdais also questioned the directive for him to drop back behind Dixon for using the pitlane exit to complete his overtake.

"I got Dixon on the restart and race control deemed that a violation," he said.

"I thought that was interesting because I am not quite sure what I was supposed to do. I was committed.

"I got rather upset, so I passed him right back. I was pretty happy about that. Then we were just cruising."

Bourdais is now fourth in the standings, with two 13th places at Phoenix and Long Beach dropping him down the order after starting the season with a victory at St Petersburg.