Penske's Castroneves moved from fourth to the lead between laps 189 and 194 of the 200, and looked on course for a fourth Indy 500 win.

Having recovered from a slow pitstop mid-race, Sato followed him through when passing erstwhile leader Max Chilton.

Sato then passed Castroneves on the front straight to take the lead with five laps remaining.

Castroneves stayed in touch, and had a look around the outside of the Andretti Autosport driver at Turn 1 on the penultimate lap, but Sato knew he could trust the veteran.

"I just got down to my job, believed in the car, and in the pitstops.

"But just, you know, waiting [for] the moment. The last few laps - they were the moment.

"I know Helio is always coming on a charge. But he's such a gentleman, such a fair player.

The victory is the first for a Japanese driver in history of the race, five years after Sato crashed at Turn 1 on the final lap trying to pass Dario Franchitti for the lead.

It is also Sato's second IndyCar win and first since joining Andretti Autosport for this season. 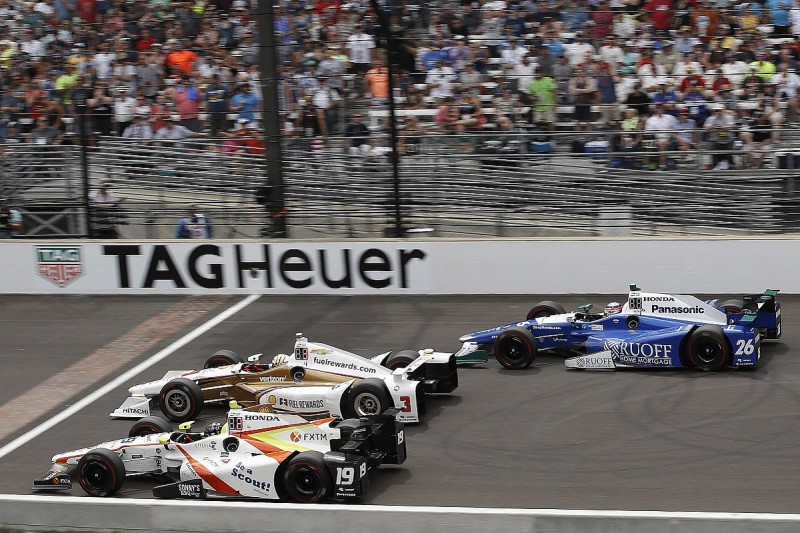 "We had the right guy doing it, for sure," he said of Sato. "He drove a superb race. I watched him very closely.

"There were many times where he was in a difficult situation, and he would get out of the situation.

"He showed a lot of patience. But then when he had to go, he went.

"There was one move [pictured] where he passed two cars on the outside in Turn 1, which was a very important move, because that gave him the track position of the top two guys in front of him.

"That was one of the moves of the race, in my opinion. When I saw that, I'm like, 'Whoa, I think we're going to win this thing.'

"He didn't let us down. He drove very, very well."