Returning to full-time IndyCar competition for the first time in four years this season, Hildebrand got a tow in order to set his lap of 19.0401s - an average speed of 193.234mph - in Saturday's afternoon session.

However, even his best effort without a tow was quicker than Helio Castroneves' 2016 Phoenix pole time.

Hildebrand's time was not bettered in the evening session and he finished the test on top, but having crashed in the final 20 minutes at Turns 3 and 4 after a brush with Will Power's Penske.

Ed Carpenter made it a one-two for his team, taking second spot with a 19.1223s lap, ahead of Penske's Josef Newgarden, Castroneves and Power.

Newgarden set the pace on Friday, and had a run-in with Dale Coyne Racing's Sebastien Bourdais in the evening session.

In a low-percentage, late divebomb, Newgarden rubbed wheels with a surprised Bourdais at Turn 1, with the French driver forced up the track but able to keep his car out of the wall.

First of the Hondas was Schmidt Peterson Motorsports' Mikhail Aleshin in sixth, followed by Tony Kanaan in the best of the Ganassi cars, reigning champion Simon Pagenaud, Bourdais and Aleshin's team-mate James Hinchcliffe. 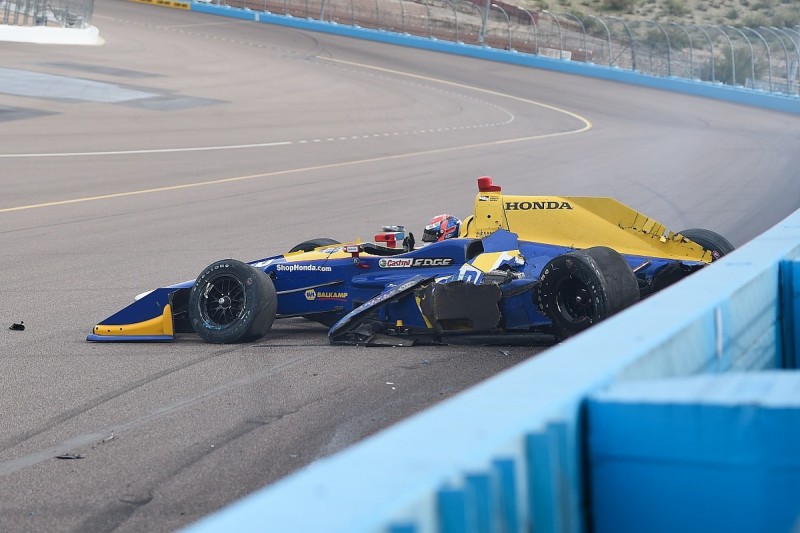 Ryan Hunter-Reay set the pace in the evening session and wound up 12th in the combined order, while team-mates Alexander Rossi - inside the first five minutes of the day, above - and Takuma Sato crashed on their way 21st and 16th.

Graham Rahal also found the wall, at Turn 1 in the evening session, and finished the test in 13th place.