He has now parted with the Techeetah Formula E team with the intention of being available for the rest of the IndyCar season.

But in order to race at Texas, Gutierrez would first have to take an oval rookie test and this is not possible this week as IndyCar is in a testing blackout period.

The series' next oval round is not until the Iowa Speedway event in July.

Autosport understands Oriol Servia is the leading candidate to take the Coyne drive for Texas.

Servia drove for Coyne in Champ Car in 2004 and is available for Texas as his part-time deal with Rahal Letterman Lanigan Racing ended for now after Detroit.

Gutierrez finished 19th and 14th in the two Detroit races. 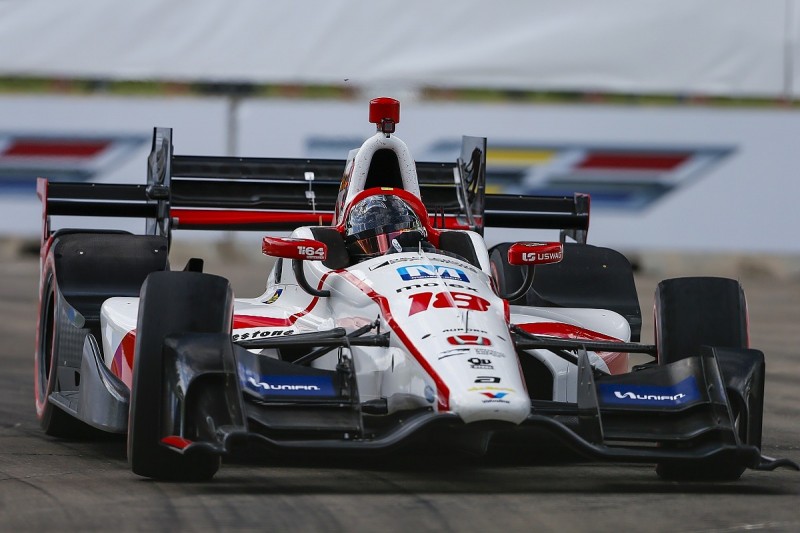 His advisor Adrian Fernandez - a Champ Car and IndyCar race winner - said that while he was "very pleased" with Gutierrez's debut, it was important he had maximum preparation time for ovals.

"It's not easy by any means to jump in a car without any time or preparation and race at such a hard track like Detroit," Fernandez told Autosport.

"That's extremely difficult regardless of how much experience a driver has with different types of car.

"So I was very pleased with Esteban. He kept his nose clean and did a decent job under the circumstances.

"But my opinion is that you can do this on a road or street course but I don't think you should do it on an oval - not without good preparation.

"You have an example with Fernando Alonso. He did an extremely good job but at Indy he had a week to prepare.

"He had a test day, he had rookie orientation where they take you slowly through the build-up to high speed, he had all types of good people helping him like Michael [Andretti] and Gil de Ferran.

"And then he had a lot of days to take his time and learn all the tricks about ovals.

"Texas is one of the most difficult ovals to just come and race, so I would say [Gutierrez] should step away from it until he has proper time testing on ovals."

Gutierrez is expected to resume his Coyne deal from the next non-oval race at Elkhart Lake on June 25.