Graham Rahal continued his impressive form to dominate in Detroit, becoming the first man to win both races of IndyCar's Belle Isle double-header

Starting third, Rahal showed no signs of having lost any pace from Saturday and made short work of Ryan Hunter-Reay, passing him on lap nine of 70 with an audacious move around the outside of Turn 7 for second.

Making his first of two stops on lap 24, Rahal proceeded to jump polesitter Takuma Sato in the pits after running an extra lap longer than the Japanese driver, emerging behind only the three-stopping Josef Newgarden.

After Newgarden pitted again, Rahal claimed the lead and started to build a large gap over the rest of the field, holding a 16-second advantage at the end of the final pitstop phase.

Coming up to lap Hunter-Reay - who dropped through the field after contact with Helio Castroneves in the early stages - Rahal was unable to close up to the Andretti driver, allowing Newgarden to whittle away at his advantage.

Newgarden - who had made his three-stop strategy work with some blistering pace - closed the gap to just under six seconds, before Hunter-Reay eventually allowed Rahal past.

The first caution was then called on lap 66 after James Hinchcliffe's Honda cried enough on the run to Turn 3, before a red flag was subsequently waved after Spencer Pigot's turbo expired on the same stretch of track.

Hunter-Reay was given the wave-around to unlap himself after the red flag, setting up a final showdown between Rahal and Newgarden on the restart. 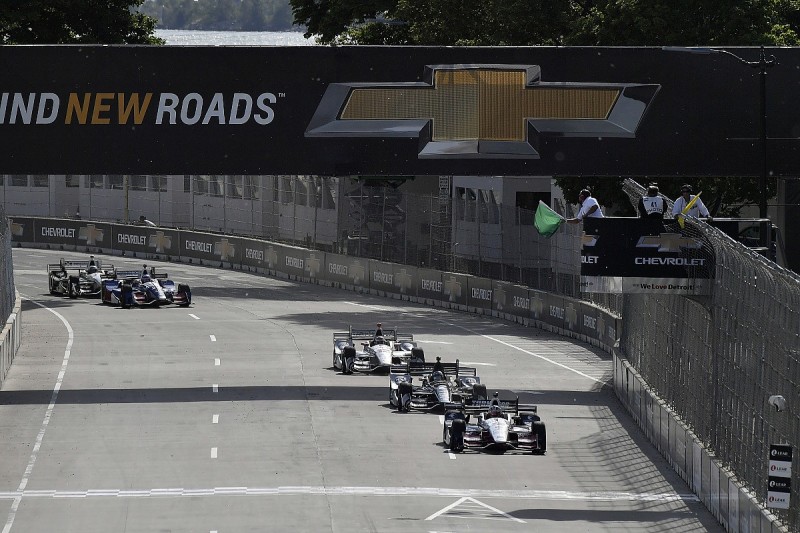 As the green flag dropped with two laps to go, Rahal was able to use his remaining push-to-pass time to streak clear of Newgarden and claim an impressive victory, becoming the first driver to win two IndyCar races in 2017.

Newgarden was under threat from Penske team-mate Will Power directly after the restart, but managed to hold onto second place across the line, over a second ahead of the Australian.

Sato was unable to convert his pole into anything greater than fourth place, narrowly beating Simon Pagenaud and Scott Dixon to the line.

Alexander Rossi made steady progress through the field to finish seventh as Charlie Kimball just managed to secure eighth, finishing only a tenth ahead of Castroneves.

Tony Kanaan rounded out the top 10, after AJ Foyt's Conor Daly dropped down the order following contact at the restart.