Wickens was on a three-stop strategy compared to race winner Alexander Rossi's two-stop option, but the SPM rookie felt he lost the chance to fight for victory due to traffic.

He came across the lapped cars of Tony Kanaan and Takuma Sato in the final stint as they battled for position and Wickens ended up finishing second - 12 seconds behind Rossi.

In IndyCar, blue flags are to be observed within a lap, but a driver is entitled to defend his position if an overtake would put him a lap down, meaning the rule is more lenient than in the European series Wickens has experienced.

When asked if race control should have been more vigilant on drivers observing blue flags, Wickens said: "Yes [but] the rules are the rules. They're not going to change this season.

"What they have is what we have to deal with throughout the whole year.

"I just thought it was comical for my entire third stint, marshals were waving blue flags every lap I went through. I felt bad for the marshals, waving flags for no reason.

"There were blue flags every time for TK [Kanaan] and Sato. They were fighting for position. It's just how the flag rules are in IndyCar. 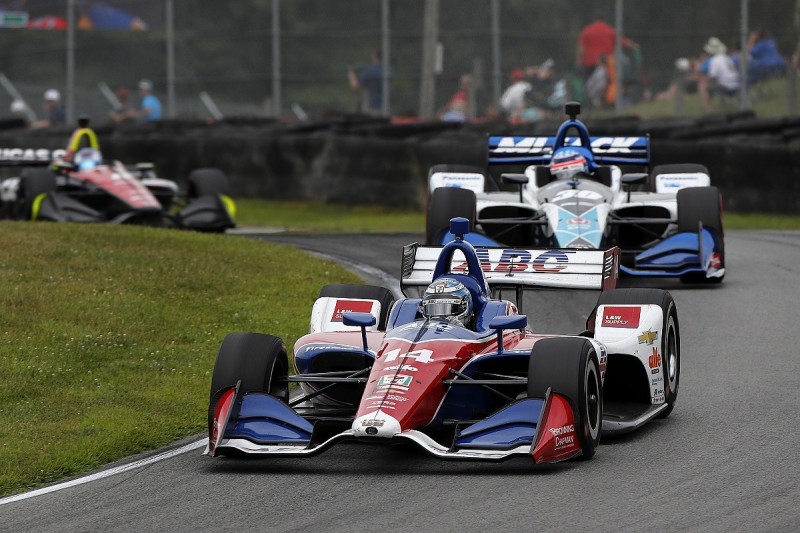 "It ruined my race, it was just frustrating. The track is pretty hard to overtake on.

"I would have had to blow 100 seconds of overtaking [push-to-pass boost] to try to pull off a move, and I wasn't ready to do that.

"I think TK put Sato on the grass in Turn 3 once. I was waiting in a podium spot to see what they were going to do.

"Obviously I wasn't interested in going three-wide with them when they're pushing each other in the grass. I saw a win slip away, but it was risk-versus-reward.

"I waited for a mistake from Sato, capitalised on that, [then] was able to get by TK in one lap."

Wickens has previously made his disdain for poor blue flag behaviour known, after crashing out at Iowa when trying to pass Ed Carpenter.

He believed he could have forced Rossi to abandon a two-stop strategy without traffic.

"I think I would have been able to challenge him if I had a clear third stint," he said. "We lost a good 10 or so seconds.

"When you have 20-odd seconds at hand, it's probably easy to hit a fuel number. I think [had I been] closing in, he would not have made it [to the finish].

"We knew going in the three stops, two stops was basically the same, but the risk was higher with three stops.

"I got stuck behind Sato on new red [faster, higher degrading tyres]. He was quick enough I couldn't do anything. I had to wait for him to get a bit of degradation."