Michael Shank Racing is planning to undertake a 10-race IndyCar programme in 2019 as a continuation of its partnership with Schmidt Peterson Motorsports, ahead of an intended future full-time expansion

The sportscar outfit signed a deal to run Jack Harvey for six races in 2018, having previously run the Briton in last year's Indianapolis 500.

Shank came close to winning this year's Indy 500 when Harvey cycled to the lead pack off-strategy, but a lack of cautions prevented him stretching his fuel to the end of the race.

Team boss Michael Shank told Autosport he was aiming for 10 races next year alongside SPM.

"We're under contract with our sponsors for six and we're aiming to get to 10," he said.

"The reason we're alive is that we have a smart financial position. We could go out and run more races, put it on a credit card and pay it later but that won't keep my guys employed.

"If for some reason all the ducks lined up and we could do more, we'd try to do more.

"I think 10's a good target and with tracks like Laguna Seca and potentially COTA in Austin [if Texas Motor Speedway exited the series], they're interesting markets for our sponsors.

"We'll try to buy a second car for the [Indy] 500 and put that away, we'd like to be stronger there.

"We're still learning our package and doing this in very purposeful, thought out steps.

"I'd like to be full-time next year but I think that's unrealistic, but 2020 is possible." 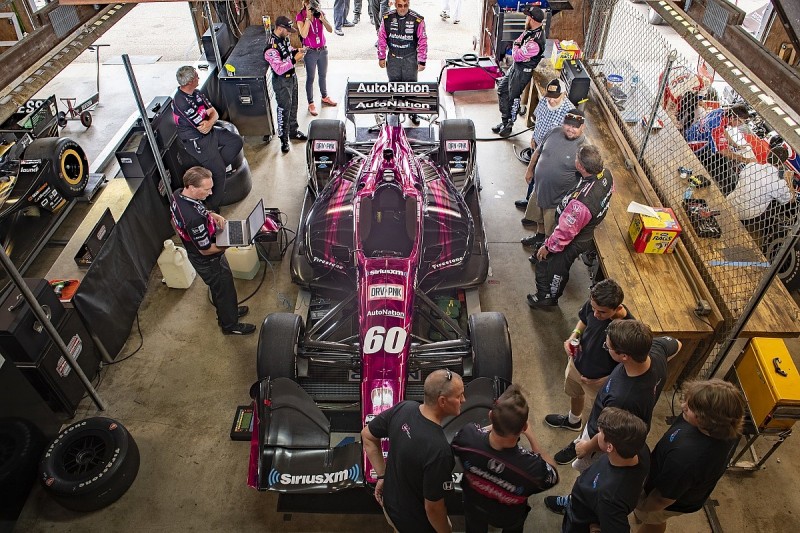 Shank said the alliance with SPM has been a huge benefit to his team, which would be open to continuing a technical partnership if Shank moved to a full-time entry.

"That [the affiliation] was a really calculated and discussed item before we went in," he said.

"The question was: Do we do this on our own? Our race team is well staffed and most have experience.

"Do we take the struggle or do we get a technical partnership with a Honda team because of our sportscar project as a Honda guy? It made sense to find someone, Sam [Schmidt, SPM team co-owner] was interested.

"Also, we get the technology aspect. Not only do we get set-up information but we get data that Jack just might not.

"When we're in the pitlane, we're real-time getting information from the other cars, how much tyre pressure James [Hinchcliffe] has and the pace of Robbie [Robert Wickens].

"All those things, seeing it in real time, I think it's worked. We aren't ready for certain things, we're not a full-year team yet so we need the support and some technical help. We're not too proud to say 'hey, we're not there yet'."

Shank told Autosport he plans to continue running Harvey in 2019, and that despite calls "every month" he is not planning to expand to a two-car outfit in the near future.