Penske controlled practice for IndyCar's first road course race of the season at Barber Motorsports Park, with Josef Newgarden fastest of all in a chaotic day of running

Newgarden's benchmark time came in the final minutes of the second session after the returning Rene Binder crashed his Juncos Racing-run car into the tyre wall at Turn 16.

The lengthy delay in recovering his car meant the field had just seven minutes to use track conditions that will closely mirror Saturday's qualifying session.

That led to a dash to the flag as a succession of drivers improved their times on the quicker red compound tyres.

Initially, it was the impressive Ed Carpenter Racing driver Spencer Pigot who led the way before Newgarden deposed him in the final minutes.

He then improved his time again to finish the day with the fastest laptime of 1m07.4345s.

That late improvement came after a series of set-up tweaks midway through the session that typified the learning process with the new universal aerokit at Barber.

Dale Coyne Racing's Sebastien Bourdais was third thanks to a last-minute lap, having been fortunate to still be on track after almost hitting the wall at Turn 5 earlier in the day.

But there was no such luck for Penske's Simon Pagenaud or Andretti's Zach Veach, with the pair both skating across the gravel and causing red flags before the midway point of the second practice.

Newgarden had also had a similar off in the first session but, with drivers on qualifying simulations, the attrition was much higher in the afternoon. 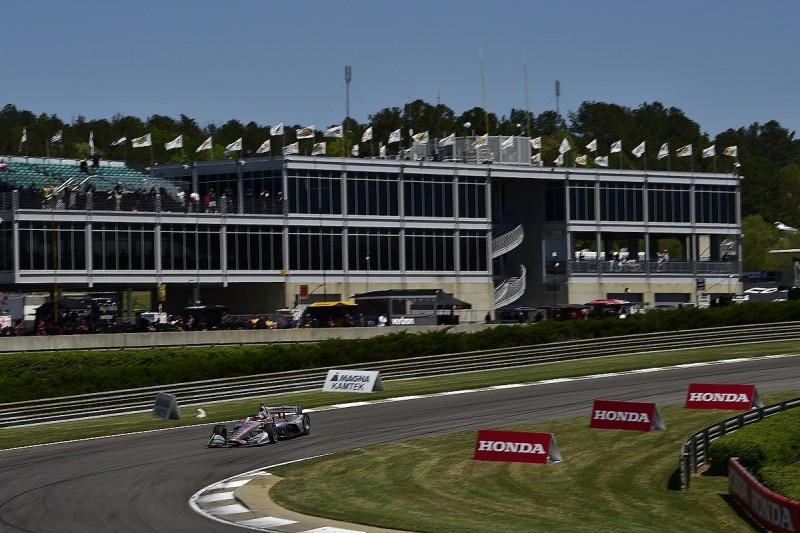 He recovered from that off to go second behind his team-mate Will Power in the first practice as Penske and Chevrolet asserted control.

Chip Ganassi Racing's Scott Dixon was the most impressive Honda-powered runner, finishing third and fourth in the two practices.

Carlin made what it considered a breakthrough after a top 10 finish at the last race in Long Beach, and Max Chilton continued that form at Barber with fourth in the morning before slipping to 11th later on.

Schmidt Peterson Motorsports again struggled at Barber, having endured a woeful pre-season test at the venue.

Robert Wickens was only 13th in the first session, five places ahead of team-mate James Hinchcliffe, and then missed most of the afternoon with concerns over water pressure.

Championship leader Alexander Rossi spun off at the long high-speed Turn 15 and caused a red flag in the morning before recovering to fifth in the afternoon.