Reigning IndyCar champion Josef Newgarden recorded his second victory of season for Team Penske under caution in the second race of the double-header at Gateway.

Newgarden gained the lead from team-mate Will Power through the third and final pitstop cycle on lap 152 after the Australian was briefly held up by backmarker Ed Carpenter on his in-lap.

Swift work from the Penske crew got Newgarden out first, although he did go side-by-side with Arrow McLaren SP's Pato O'Ward exiting the pitlane.

Double series champion Newgarden then held a four-tenths of a second buffer to the chasing O'Ward, which the Mexican rookie was unable to close before polesitter Takuma Sato hit the Turn 2 wall on lap 197 of 200 to bring out the yellow flags.

It meant for the second time in a week an IndyCar race finished under caution after last Sunday's Indianapolis 500 - when Sato profited to claim victory.

The win in the second Gateway race is Newgarden's first since the second Iowa race in July, the 16th triumph of his career, Penske's sixth win in 12 races at Gateway and makes him the first driver to win two races at the 1.25-mile oval circuit.

Power, who had assumed control of the race through the middle stint came home in third place to make it a Penske 1-3 ahead of rookie Rinus Veekay for Dale Coyne Racing. 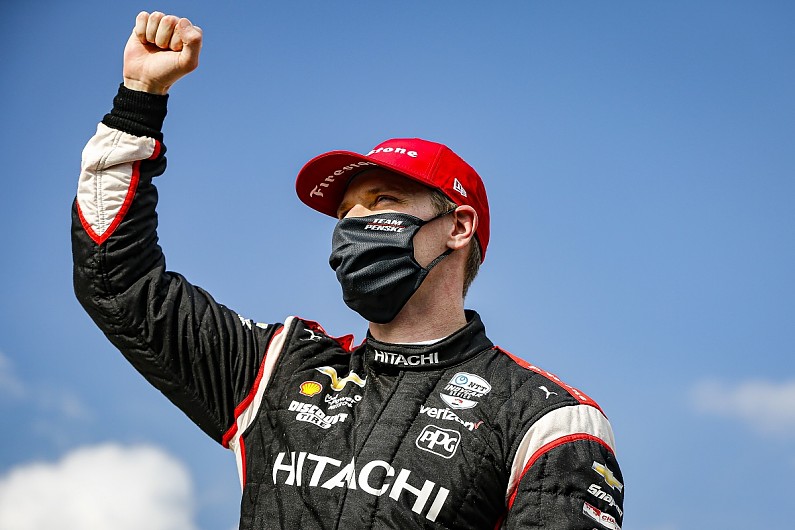 Veekay, who had started 18th on the 23-car grid was the early mover, quickly passing six cars to run on the fringes of the top 10, before his DCR squad opted to place the #21 on an aggressive strategy.

At each of the three fuel stops, Veekay was brought in a handful of laps before the chasing pack to drop the him into clean air and allow the Dutchman to make up time on those ahead.

It worked well as he claimed a season's best result of fourth, eclipsing the fifth place he took on the Indianapolis road course.

Championship leader and race one winner Scott Dixon had a quiet afternoon, starting sixth and coming fifth losing 20 points to Newgarden in the standings.

The Chip Ganassi driver does maintain a 97-point lead over his Penske rival going into the final three scheduled races of the campaign.

Colton Herta followed fourth yesterday with a solid sixth for his Harding Steinbrenner Andretti Autosport machine, although he nearly lost control of the car after contact and ran wide into cement dust put down after a pre-race oil spill.

Felix Rosenqvist (Ganassi), Conor Daly (Carlin), who maintained his record of always finishing inside the top 10 at Gateway, Sato and Santino Ferrucci (Dale Coyne) rounded out the top 10 finishers.

Alexander Rossi, who was taken out before Saturday's race had started, had an anonymous afternoon on his way to 14th for Andretti Autosport, as did 2016 series champion Simon Pagenaud in 16th for Penske.

In what could be his final IndyCar race, A.J Foyt Racing's 2004 series champion Tony Kanaan came home in a lapped 19th place.