Alexander Rossi says he "had a car to win" the Indianapolis 500 before a penalty for pit lane contact with Takuma Sato and a Turn 2 crash put him out.

The Andretti Autosport driver, a winner of the 500 in 2016, was trading the lead with Ganassi's Scott Dixon for much of the race and looked set to be a contender for the race victory entering the final third.

But when the field pitted under caution for Alex Palou's Turn 1 crash, a dropped wheelnut on his right-rear corner meant Rossi was late leaving his pit box and put him on a colission course with Sato's Rahal Letterman Lanigan Racing machine.

Race control deemed it to be an unsafe release and ordered Rossi to drop to the rear of the field.

He was making good progress and had recovered to 17th when he lost control at Turn 2 on Lap 144 and slammed the wall.

"We were never planning on being that far back," Rossi told TV crews after being released from the infield care centre.

"We just lost it, there's a lot of dirty air back there and it was tough in Turn 2 all day.

"The #27 NAPA Andretti Honda was awesome, I thought we had a car to win. 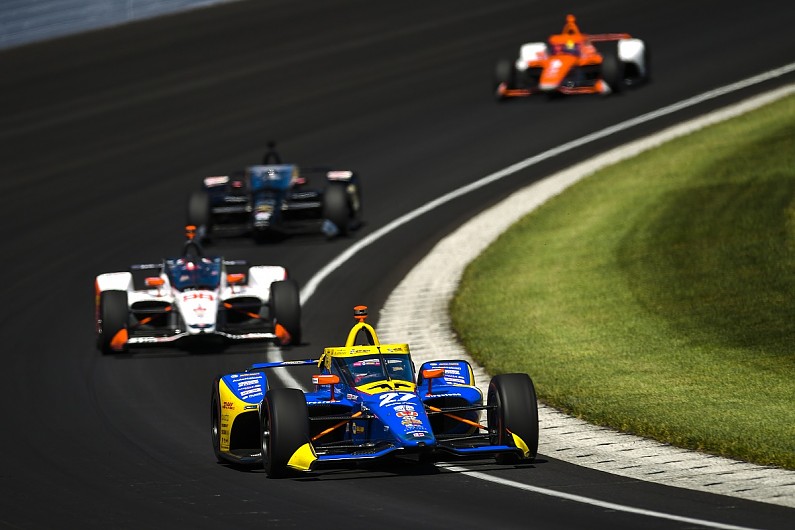 "I don't even want to talk about the penalty right now, I'm going to have to have a long conversation with somebody about that."

Rossi was then shown a replay of the pit lane incident with Sato by NBC, and when asked what he thought replied: "Obviously I can't see anything, I just go on when I'm told.

"But Takuma has been moving in reaction at restarts and doesn't get a penalty, so consistency is... we'll talk about it.

"I don't have an opinion right now.

"It's obviously frustrating and there's two sides to every story."