Sato, who also won in 2017 for Andretti Autosport, was leading with five laps of the scheduled 200 left to run, fighting through backmarker traffic while trying to fend off Chip Ganassi Racing's Scott Dixon.

The Rahal Letterman Lanigan Racing driver's lead over long-time leader Dixon had been eradicated by his failure to clear the traffic, but managed to pass Tony Kanaan's AJ Foyt Racing machine to put a car between himself and the chasing #9 Honda of Dixon.

However, on lap 196, fellow RLLR driver Pigot got loose exiting Turn 4 and cannoned into the end of the pit-wall to bring out the caution flags, effectively ending the race four laps early and confirming Sato as the winner, the ninth driver to win became a two-time race winner.

In a race dominated by fuel strategy, Dixon spent much of the afternoon attempting to save fuel in the draft of fellow drivers, allowing Sato past on lap 156 shortly before the final round of green-flag pitstops.

The Japanese driver then pitted for the final time on lap 169 with Dixon responding a lap later, briefly undercutting Sato, before the former Formula 1 driver got past on lap 172 to assume control of the race.

That became a lead he would ultimately keep, handing RLLR its first Indy 500 win since Buddy Rice in 2004 and Honda's 13th overall. 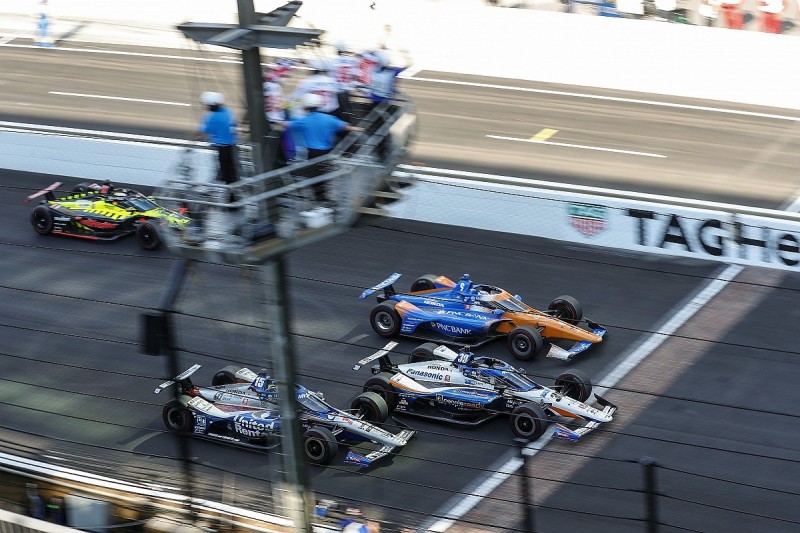 Dixon led a race high 111 laps and was dominant through the early stages of the race, sweeping past pole-sitter Marco Andretti at Turn 1 on the opening tour.

Aside from pit-stop cycles, 2008 winner Dixon was a fixture at the head of the field, trying to eke out his fuel as long as he could, including swapping the lead with Alexander Rossi five times in as many laps just after half-way.

Dixon could not quite reel Sato in after the final stops, but the five-time IndyCar champion's second place was the New Zealander's best finish since second in 2012.

Graham Rahal, who like Sato had qualified within the first three rows on the grid had a quiet, steady run to third place, equalling his best result from 2011.

Rahal swooped past reigning series champion Josef Newgarden on lap 172 at Turn 3 for third as the Honda drivers were able to up their pace to levels the Chevrolet runners could not quite keep up with.

Ex-Formula 2 driver Santino Ferrucci took an Indy 500 best result of fourth ahead of Newgarden - who finished as the lead Chevrolet runner for Team Penske in fifth.

Briton Jack Harvey and 2014 winner Ryan Hunter-Reay rounded out the top 10, ahead of three-time winner Helio Castroneves in his typical guest outing for Penske.

Polesitter Andretti barely featured in the race and came home in 13th, ahead of 2018 winner Will Power - who had a quiet afternoon in the #12 Penske. 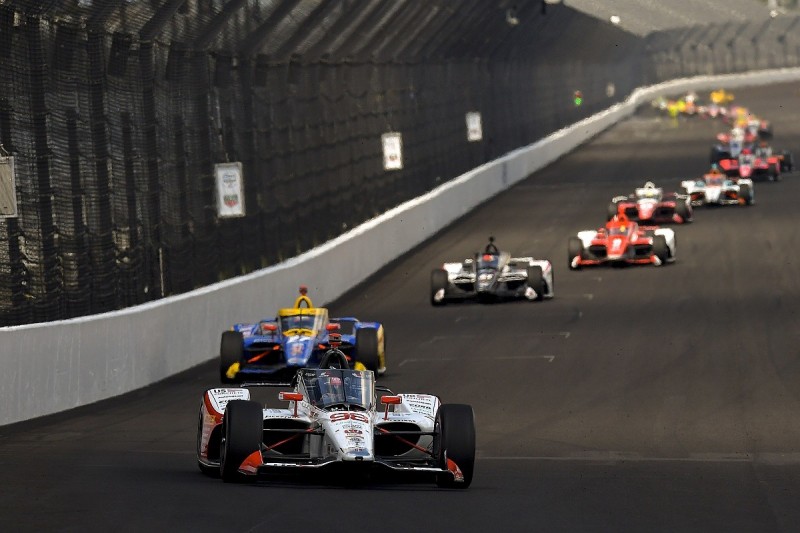 Rossi had provided Dixon with the sternest opposition in the opening stages, but the Andretti driver had a mixed afternoon, which included missing the pit-entry on lap 63 forcing another tour and a penalty for an unsafe release on Sato on pit-road.

That penalty sent the #27 Andretti to the rear of the field, where he passed five cars in one move after a restart for an Alex Palou crash, but his day was ended with a crash on lap 144.

Defending race winner Simon Pagenaud opted to pit early under a caution after James Davison's right-front brake exploded, but the move off-sequence did not pay off for the Penske driver, who took 22nd behind an anonymous outing for Fernando Alonso in the third Arrow McLaren SP entry.

Alonso's team-mate Oliver Askew survived a hefty accident shortly after half-way, when he spun trying to avoid Conor Daly's own spin and hit the SAFER barrier on the inside of Turn 4 broadside.

Askew was able to exit his wrecked car, with the assistance of the medical team, but was later released from the medical centre having passed a check-up.