Josef Newgarden became the first IndyCar driver to win from pole position at Iowa, as the reigning series champion dominated on his way to his first win of the season.

Newgarden, who finished fifth in Friday night's first encounter at the 0.8-mile Iowa short oval, held position at the start ahead of Penske team-mate Will Power and Carlin's Conor Daly - the #1 Chevrolet powered machine easing into a comfortable lead.

The first green-flag pitstops came slightly earlier than in the first race, with the likes of Simon Pagenaud, Colton Herta and Felix Rosenqvist triggering a flurry of stops after their first visits to pit-road on lap 51.

Leading duo Newgarden and Power responded on laps 58 and 59, respectively, with the former relinquishing the lead momentarily to Scott Dixon as the cycle shook out.

By lap 100, Power had fallen to fourth behind Arrow McLaren SP's Pato O'Ward and Daly, with O'Ward chasing the leading Penske, keeping him honest with the gap stable at around 1s.

On lap 114, the first caution period of the race was called for after oval specialist Ed Carpenter clouted the outside wall.

This incident came in the middle of the second round of green-flag pit-stops, although the order remained pretty much the same once things shook out with Newgarden taking the restart in P1, O'Ward, Power and Graham Rahal just behind.

Throughout the next stint until stops began on lap 172, O'Ward valiantly chased Newgarden as the duo cleared backmarker traffic.

But the Mexican's race was soon ruined after a wheel was not properly secured at his stop, leaving him three laps down and out of contention.

After another brief caution for a Ryan Hunter-Reay spin while exiting the pits, the race restarted for the final time on lap 194 with Newgarden once again assuming control. 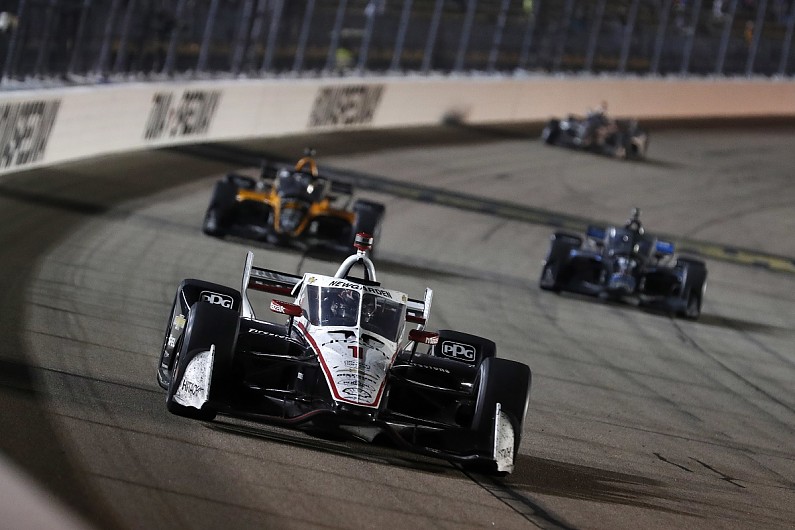 Newgarden, who would ultimately lead 214 laps of 250, then comfortably held Power at bay for the remaining 56 laps to record his first win of his title defence by 2.786s.

Rahal, who had struggled throughout practice, qualifying and race one was the big benefactor from the Carpenter caution - which allowed him to vault from being mired in the midfield to the leading gaggle.

The Rahal Letterman Laningan Racing driver was the last of the 23-strong pack not to pit before Carpenter struck the wall, allowing the #15 to make up track position.

Thereafter, Rahal drove strongly, fending off race one winner Pagenaud late on to take third, with the 2016 series champion in turn just pipping Chip Ganassi's Dixon - whose championship lead was cut by one point to 49.

After a maiden series podium in the first encounter, Arrow McLaren SP's Oliver Askew once again banked solid points for the fledging squad with sixth as Jack Harvey recorded a second seventh place of the weekend for Meyer Shank Racing.

On a troubled night for the Andretti Autosport fleet, Alexander Rossi was the lead finisher in eighth with team-mate Marco Andretti rounding out the top 10 and Marcus Ericsson posting a fifth consecutive top 10 result for CGR in ninth.

In his final race at Iowa before his planned retirement, 2010 winner Tony Kanaan ran well inside the top 10 for AJ Foyt Racing, but fell to 11th by the flag.