Ed Carpenter Racing, which took pole for the 2018 race through team owner Ed Carpenter, was third thanks to Spencer Pigot's best effort.

But the session was also interrupted by a crash for ex-Formula 1 driver Alonso, pictured below, who hit the wall at Turn 3 after 46 laps.

He was cleared from the medical centre and McLaren did not complete any further laps as it opted to repair the car rather than prepare the back-up machine.

He pinched down toward the grass and the rear of the car looped around, causing him to go backwards into the outside SAFER barrier.

Rosenqvist was later cleared by the medical centre.

He said: "I'm good. I was behind Colton (Herta) and just trying to run the car in traffic, and I just felt a very sudden change of having a bit of push, and it went very loose very fast.

"I couldn't react to it. Luckily my team has built a really, really good car, a really safe car. I'm completely fine. 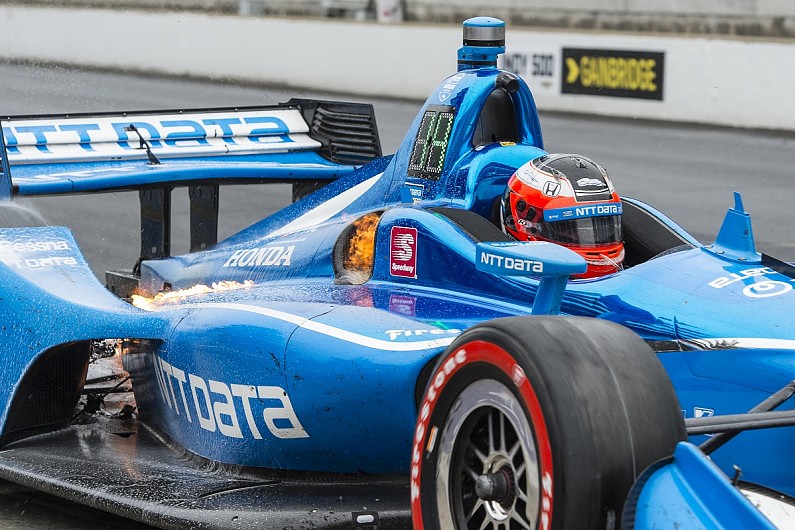 "I just have to really analyse what happened there. I'm not sure if I was down on the kerb.

"It kind of looks like I could have been up a little bit, and that probably explains it. I cannot really remember.

Zach Veach was the leading Andretti Autosport driver with the seventh fastest time. Veach was the last driver to lap the 228mph bracket, with Charlie Kimball - who took third in 2015 - running eighth for Carlin Racing.

In the no-tow speeds - speeds set without the aid of a draft from a car or cars ahead - Andretti's Alexander Rossi led the rankings on 224.648mph.

Patricio O'Ward, who suffered a mechanical issue in his Carlin car yesterday, breezed through all three phases of his rookie orientation practice this morning before the track opened.

O'Ward went on to finish the day 22nd and 13th in the no-tow speeds.