Chip Ganassi Racing's Scott Dixon says he is unsure what IndyCar can do to alter its new-for-2018 car in order to improve racing at the Indianapolis 500.

The majority of this year's race was run single-file with drivers holding gaps of around one second to their nearest rivals.

Concerns over passing had been raised throughout the Month of May, but IndyCar did not change the car's downforce levels ahead of the Indy 500.

While Andretti's Alexander Rossi had previously suggested a downforce alteration may be required for the superspeedway aerokit, Dixon was not convinced.

"Yeah, I don't know how to do it," he said. "The downforce level is maybe not necessarily the issue.

"If the guy in front fumbles a little, but is still behind the car in front, he sucks up so that you can't pass him.

"It's almost like the cars need a little more drag to make that happen or maybe a little bit of downforce so you can stay closer, utilise it.

"It seemed like you had to come from quite a long way back. "Even when I got into a scenario with a clear track, slow competitors in front of us, it was very tough to get a run.

"There was no real wind, so no real corner that was distinctly harder than the others.

"Normally [Turn] 2 or 4 has a big shift and you can get some cars that are bad, get them off those corners. That just didn't play true today." 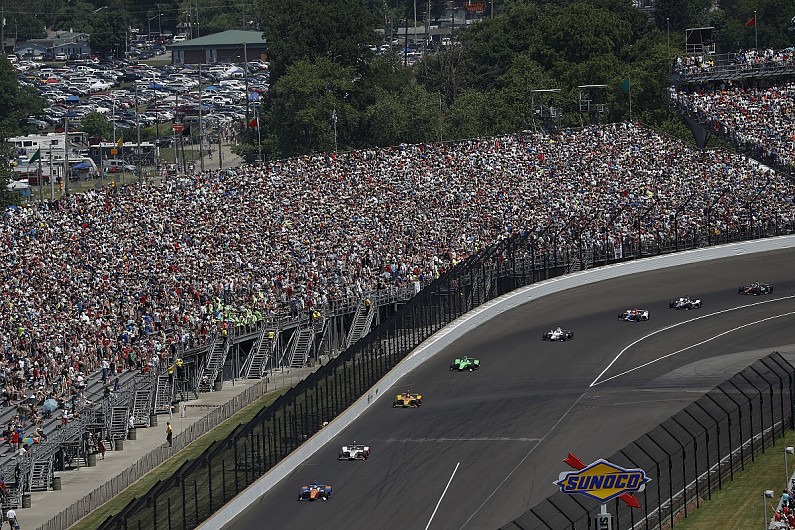 Ed Carpenter, who finished second to race-winner Will Power, added that while the car was rewarding to drive, it may need tweaks.

"It was a totally different type of race, I'll have to watch it from the outside to see from that perspective," he said.

"I like the way [the 2018 car] drives. It's definitely challenging to the driver.

"The old car [with the manufacturer aerokits], if you had a really good car, you couldn't really get rewarded by getting away or getting separation.

"I think if you have a good enough car, you're rewarded by being able to get away a little bit.

"I do think we need to maybe make little improvements just because it's so hard in dirty air to do much, to even have a better finish at the end.

"All-in-all, for this new kit, it's performed so well all year. Like every iteration of cars, the longer we have them, the better they'll get."

Carpenter also confirmed that pre-race predictions that track position would prove to be crucial came true.

"Track position was everything we thought it was going to be coming into the day," he said.

"You could work your way through some lapped traffic. It was really hard to pass anybody if they had clean air in front of them.

"If you got stacked up in a group of cars all in traffic, I felt like my car was good enough - I could kind of pick my way through some of them."