Power made his final stop on lap 171 of 200 running a conventional five-stop strategy like most of his rival frontrunners.

But Kanaan's spin and crash at Turn 2 opened the door to the three one-off entries of Oriol Servia, Jack Harvey and Stefan Wilson - who sat out last year's race for Fernando Alonso to take part.

On the final restart, Power was able to bide his time, passing Servia, then taking the lead again when Harvey and Wilson were unable to stretch fuel sufficiently to make the flag.

Polesitter Ed Carpenter and Power led the most laps of the race, but Power was able to largely take control of the race from the ECR team owner before the midway distance.

The two largely matched each other in stint length, but Carpenter had no answer to Power late on and finished second. 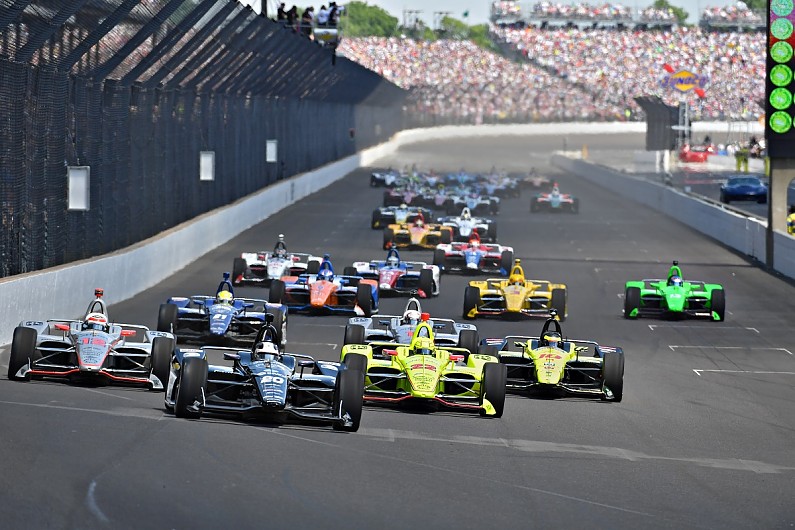 Track position proved crucial in the race, meaning that the Andretti pairing of Alexander Rossi and Ryan Hunter-Reay lost the chance to take part in the final duel by being held up by Dixon while he was fuel saving.

Rossi might have missed out on the podium place, but having started 32nd on the grid, he pulled off a stunning series of passes to climb the field.

The 2016 Indy 500 winner used the restarts to gain track position but he was unable to save fuel sufficiently to try an alternative strategy earlier in the race.

Hunter-Reay climbed inside the top 10 early in the race and kept with the leading pack of the top five cars late on.

Penske's Simon Pagenaud was sixth ahead of Carlos Munoz, while Josef Newgarden was unable to make an extra stop for a short-run stint pay off in the middle of the race.

Schmidt Peterson Motorsports' Robert Wickens ran off-sequence for the majority, regularly cycling into the top three as a result, but he finished ninth in his first Indy 500 in a turnaround for SPM in a month that hit its nadir when James Hinchcliffe failed to qualify.

Graham Rahal did the hard work early in the race, climbing 13 positions in the first 50 laps to figure in the top 10 late on having previously been baffled by his car's intermittent lack of pace throughout the month.

His Rahal Letterman Lanigan Racing team-mate Takuma Sato was one of several star names to crash out of the race. James Davison slowed on track at the quarter distance with a mechanical problem.

Lapping as slowly as 203mph, the unsighted Sato rear-ended the AJ Foyt Racing-affiliated car and forced the pair into retirement.

The more challenging 2018 car not only claimed the race of Kanaan, but caught out Danica Patrick, Helio Castroneves and Sebastien Bourdais.

Patrick started seventh in her final career race but fell to the outside fringes of the top 10 before she touched her front left wheel below the white line and spun at Turn 2 into the wall.

Bourdais then had a similar incident late on, failing to catch a loose car on the run to Turn 4 before he hit the outside wall and retired.

Castroneves had largely solid run in the Penske train that followed Carpenter in the first half of the race but crashed out at Turn 4 in a similar spin.

Ganassi's Ed Jones was taken to a nearby hospital as a precaution after he complained of neck and head pain after an early crash.