Leist, making his oval-racing debut, converted pole position into the lead at the start despite pressure from fast-starting Carlin team-mate Claman de Melo on the first half of the lap.

A full-course caution was then thrown when Colton Herta spun after making contact with Dalton Kellett's Andretti Autosport entry coming through Turn 2 and collected the unfortunate Ryan Norman. While Kellett kept going in third place, both Herta and Norman were out.

The race restarted on lap six, with Leist holding the lead and staying there to the end of the 40-lap race. 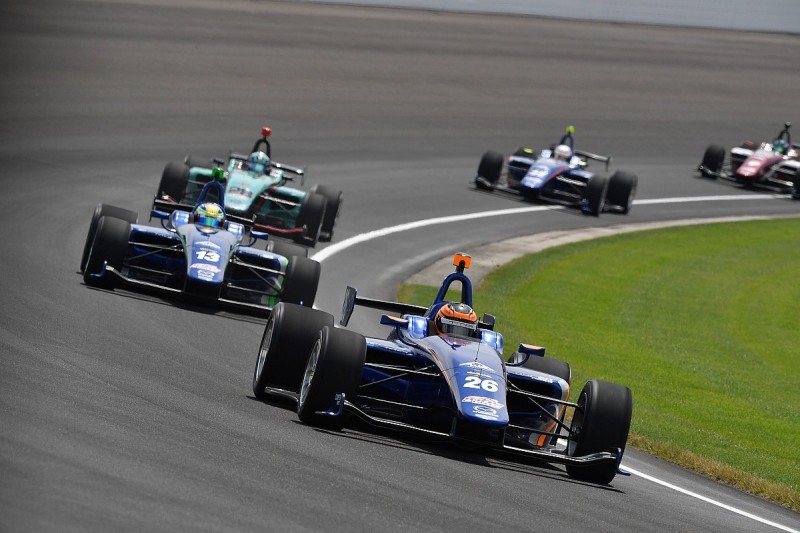 The Brazilian did come under pressure in the final quarter of the race from Belardi Auto Racing's Aaron Telitz, who started sixth but moved up to second by passing Kellett around the outside of Turn 3 just before half distance.

He gradually closed the gap to Leist and launched an attack around the outside of Turn 1 on lap 34.

The pair battled for much of the lap, with Telitz unable to complete the move at Turn 3 and losing momentum.

This allowed Kellett to pass him on the run off Turn 4 to take second place, only for Telitz to regain the position at the same place on the last lap and cross the line 0.7760s behind Leist.

Carlin's Neil Alberico finished fourth ahead of Santiago Urrutia and de Melo, while points leader Kyle Kaiser had an uncompetitive weekend and was a distant ninth but held onto top spot in the standings thanks to Nico Jamin finishing a place behind him.