The LMP2-spec Ligier-Honda JS P2 continued to lead the way on Sunday, as teams continued their preparations for the IMSA SportsCar Championship season opener at the end of the month.

Michael Shank Racing, which topped the first two days, led the way initially, with Ozz improving fractionally upon team-mate Olivier Pla's Friday time to post a best of 1m39.438s in the morning.

Derani then vaulted to the top of the charts with less than 15 minutes remaining in ideal conditions in the afternoon aboard the Tequila Patron/ESM team's similar car at 1m39.249s.

"It's nice to be here," said Derani. "We don't know what the other teams are doing but we're just sticking with our plan and working hard on making sure we have a good car for the race."

Many teams turned their best laps in the morning. Negri's time was almost 0.4s clear of Tom Long's Lola-Mazda, which showed steady improvement throughout the test, although the top 10 cars were all blanketed within one second of the fastest time.

The day was largely trouble-free as teams took advantage of comfortable temperatures and partly cloudy skies.

Russian Kirill Ladygin provided one of the biggest surprises as he turned the third fastest time in the morning, fourth overall, at 1m38.899s in the No 37 SMP Racing BR01-Nissan, edging more experienced compatriot Mikhail Aleshin and fellow veterans Maurizio Mediani and Nicolas Minassian.

The team did have one minor scare when Aleshin spun under braking for the Bus Stop chicane and made light contact with the wall shortly before the conclusion of the morning session, although damage was minimal.

Jonathan Bomarito set the fifth fastest time overall in the morning in the second SpeedSource Lola-Mazda, while in the afternoon Andy Meyrick all but matched Katherine Legge's time from Saturday evening in the distinctive DeltaWing DCW13 at 1m39.975s.

HONOURS EVEN IN GTLM 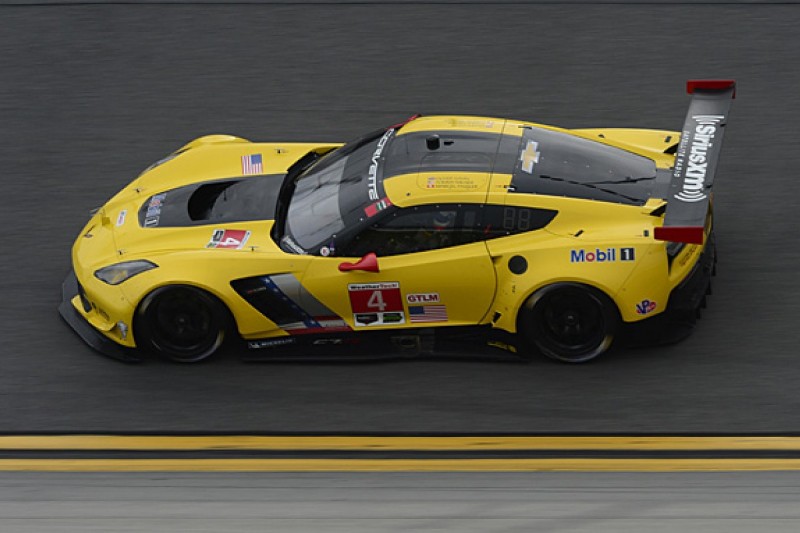 Once again there was little to choose between the new GTLM contenders from BMW, Corvette, Ford, Ferrari and Porsche.

Olivier Gavin turned the fastest time of the day for Corvette at 1m45.106s, just 0.018s clear of team-mate Mike Rockenfeller.

Bill Auberlen (BMW M6 GTLM) also turned a 1m45.1s lap this morning, when the top eight cars were all separated by less than half a second.

Nevertheless, Lucas Luhr's time aboard Team RLL's other BMW M6, 1m45.088s set in the very first session on Friday morning, remained as the best time of the three-day test, leading to much speculation as to how hard the teams were pushing to find outright pace.

Jack Hawksworth claimed the fastest time in the PC division, turning a best of 1m42.118s in the final session on Sunday afternoon for Starworks Motorsport, edging team-mate and reigning European Formula 3 champion Felix Rosenqvist by 0.340s.

The fastest GTD times of the test were turned on Sunday morning, headed by Leh Keen's 1m47.852s in Alex Job Racing's Porsche GT3 R, although some indication of the competitiveness of this class can be gleaned from the fact the top 14 cars, representing six different manufacturers, were covered by just half a second.