Renger van der Zande put the Wayne Taylor Racing Cadillac that Fernando Alonso will drive in the Daytona 24 Hours on top in session four of pre-race testing on Saturday.

Van der Zande was almost half a second faster than his nearest IMSA SportsCar Championship opponents in Saturday afternoon's session of the 'Roar Before the 24' test, lapping in 1m34.534s.

A last-lap effort by Ricky Taylor took the #7 Acura to second place, but he was still 0.483s short.

Alonso had been the fastest of the WTR drivers in the day's opening session, taking second place with a lap 0.127s shy of pacesetting Mazda Team Joest driver Harry Tincknell. 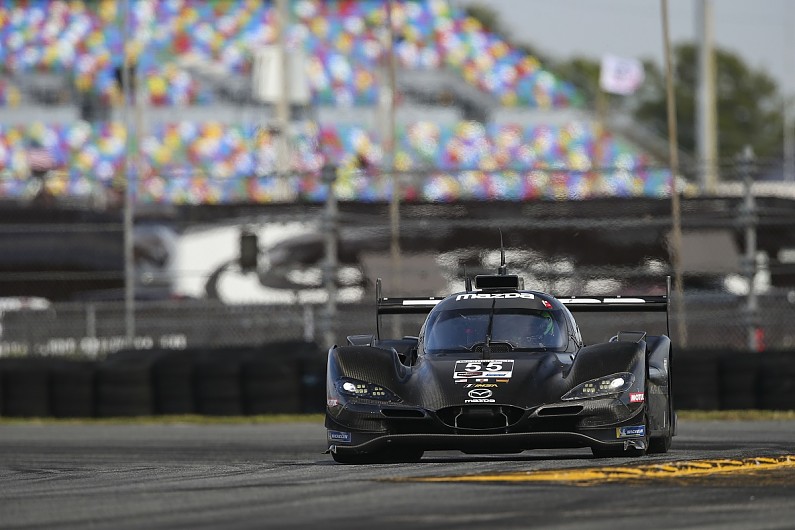 That was half a second quicker than the second Mazda, which was third in the hands of Oliver Jarvis.

Action Express Racing's Cadillacs filled fourth and fifth spots in the morning with Pipo Derani 0.764s off the top time and Joao Barbosa another 0.36s adrift.

In the afternoon, Mike Conway joined Taylor in setting his fastest lap in the last minute - following a red flag caused by Paul dalla Lana crashing the Spirit of Race GTD Ferrari - as he put the #5 Action Express Cadillac third.

The best LMP2 performance of the day's first two sessions came from Nicolas Lapierre, as he led the class for DragonSpeed in the afternoon by half a second and slashed to gap to the top DPi time to around two seconds.

The GT Le Mans class was extremely close in both of Saturday's first two sessions.

Mathieu Jaminet set the morning pace in the #912 Porsche 911 RSR with a 1m43.862s, but an excellent lap from reigning GTLM champion Antonio Garcia prevented a Porsche one-two - Garcia lapping just 0.007s slower in his Corvette C7.R and 0.122s ahead of Frederic Makowiecki in the #911 car.

Miguel Molina slotted the Risi Competizione Ferrari 488 into fourth ahead of Richard Westbrook's Ford GT and Philipp Eng in the faster of the two BMW M8s.

Later on, Chip Ganassi Racing's five-time and reigning IndyCar champion Scott Dixon topped the times in the Ford GT but was a mere 0.075s ahead of Patrick Pilet's Porsche 911 RSR. Their respective team-mates Sebastien Bourdais and Earl Bamber were third and fourth.

Black Swan Racing's Porsche 911 GT3 R was fastest in GT Daytona in the morning in the hands of Matteo Cairoli, with AJ Allmendinger just 0.026s behind in the #86 Acura NSX of Meyer Shank Racing.