The four-hour race turned into a 20-minute sprint when the safety car was deployed in the final hour.

Michel Frey led in the Race Performance ORECA-Judd/BMW 03, but quickly came under pressure from Gommendy in the TDS Morgan-Nissan LMP2.

Gommendy struggled to find a way past Frey, who was paired with Franck Mailleux, and then came under pressure from Gary Hirsch in the Morand Racing Morgan-Judd/BMW.

That appeared to give Frey breathing space, but Gommendy made better work of the traffic entering the Maggotts/Becketts complex with four laps to go to sneak past into the lead.

Gommendy said: "We knew Frey was on new tyres at the end, so I had to push very, very hard and take a lot of risks in the traffic."

Hirsch almost made it past later on the lap at Vale in the car he shared with Christian Klien and Romain Brandela, but just got squeezed out by Frey.

The Jota Sport Zytek-Nissan SN11 driven by Filipe Albuquerque, Simon Dolan and Harry Tincknell looked on course to win the race after leading much of the way.

Dolan had stabilised the gap to the chasing Mailleux when he got onto the grass as he tried to lap the second-placed GTE car driven by Michele Rugolo out of Chapel.

The car snapped sideways and speared across the track, clipping the back of Gustavo Yacaman's Larbre Morgan on the way into the wall.

Dolan never lost consciousness in the heavy impact and, after his extraction from the car, was taken to the medical centre for tests. 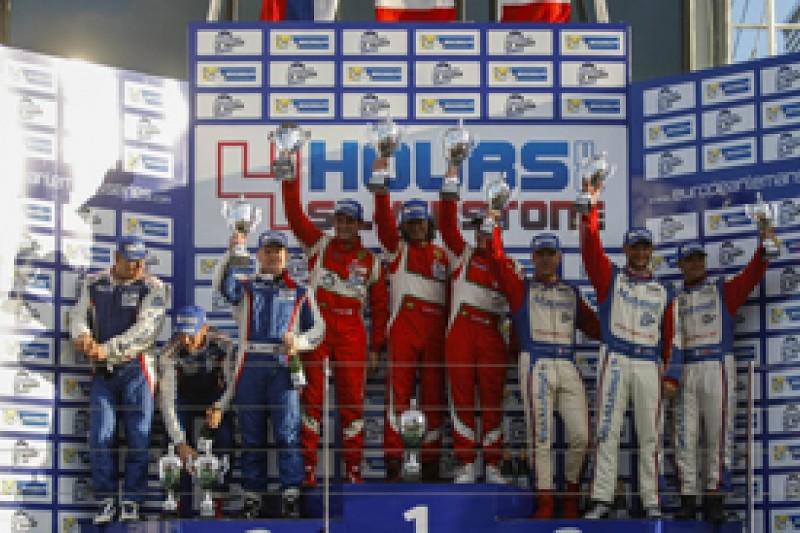 The GTE class was won by the AF Corse Ferrari 458 Italia driven by Rugolo, Duncan Cameron and Matt Griffin.

Griffin had taken the lead shortly before the final round of stops, but congestion in the pitlane meant he had to be pulled back to take on fuel.

Rugolo came out seven second behind Andrea Bertolini in the SMP Racing Ferrari but swept into the lead when his fellow Italian spun.

Pierguidi overhauled the Danish Formula Racing Ferrari of Mikkel Mac in the final 20 minutes to take the win.