A misunderstanding about compulsory stops cost Shane van Gisbergen a shot at a Supercars Eseries clean sweep on the Michigan oval.

The Kiwi took two impressive wins in the opening heats, and was among the lead group for the 45-lap finale.

However an early stop, due to confusion over the regulations, left him out of contention in the finale.

McLaughlin took victory instead, keeping the title fight alive ahead of next week's 10th and final round.

Van Gisbergen took an unlikely win in the 28-lap opener despite an early crash.

The Kiwi started the race from pole, but was swiftly dumped just outside the top 10 when Macauley Jones nerfed him into a spin after a handful of laps.

Van Gisbergen was closing in on the lead group when the majority of the frontrunners pitted on lap 20, the Red Bull Holden driver following them in.

That put him back in contention for the short run home, van Gisbergen sneaking past McLaughlin right at the line when the Penske Ford ran too low on fuel and coughed at just the wrong time.

Van Gisbergen executed another comeback in the second race.

Starting last in the reversed-grid affair, van Gisbergen made good progress early before being caught up in a shunt sparked by McLaughlin, Rick Kelly, Will Davison and David Reynolds.

A mid-race safety car led to the majority of the field making its stop, van Gisbergen sitting seventh at the restart. 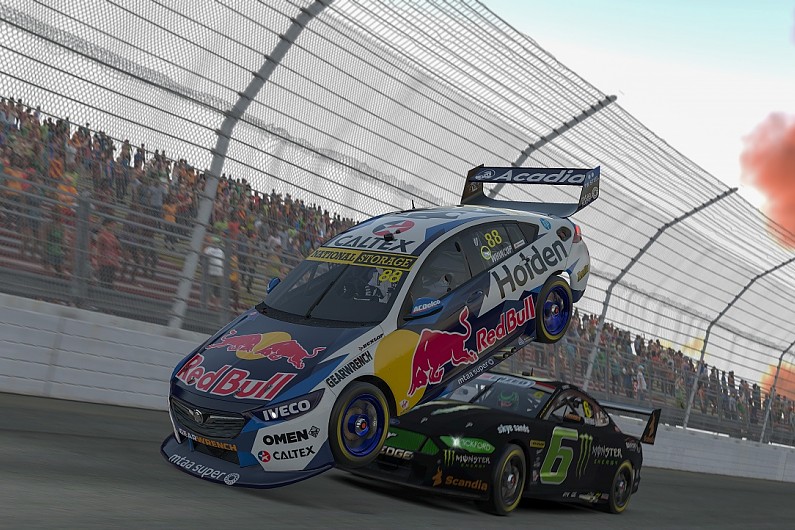 He quickly found himself leading, helped somewhat by Anton De Pasquale - who had been sitting fourth - spinning after clashing with Fabian Coulthard.

Van Gisbergen, Bryce Fullwood and McLaughlin then did battle until to the finish, Whincup - who'd crashed shortly after the restart - joining the lead group a lap down to help his team-mate take victory.

Fullwood finished second, while McLaughlin - who's race included an early rub with Garry Jacobson and spinning Lee Holdsworth in the pitlane - was third, frustrated by Whincup's late intervention.

Van Gisbergen's streak came to an end in the finale thanks to a misunderstanding over the regulations.

Thinking the 45-lapper was a mandatory two-stopper, van Gisbergen was the first of the lead group to pit on lap 15.

It was too early to make it home, however, with the likes of McLaughlin, Fullwood, Mostert and De Pasquale all pitting around mid-distance.

That left van Gisbergen momentarily way out in front, but only until he needed a second stop on lap 30.

He wasn't the only frontrunner to have issues. Fullwood was taken out of contention thanks to a 30-second hold at his stop for speeding on the way into the lane.

Mostert and De Pasquale were left as leader McLaughlin's two chief rivals, only for Mostert to wipe the Erebus Holden out in the closing stages.

He was slapped with a drivethrough for his efforts, leaving McLaughlin free to take a comfortable win over Jack Le Brocq.

Van Gisbergen finished down in 14th, his series lead cut to 78 points ahead of next week's finale.