The test, which commences on Tuesday, provides an early indication of how the 2021 grid could look, with Williams junior Ticktum set to return to the Carlin team he raced for in F3, taking the seat that is set to be vacated by Yuki Tsunoda ahead of his expected Formula 1 graduation with AlphaTauri in 2021.

Jehan Daruvala, who is also backed by Red Bull and capped off the season with a victory in the second Bahrain sprint race, will retain the other seat at Carlin.

Hitech will field fellow Red Bull drivers Juri Vips and F3 race winner Liam Lawson in an indication that it will become an unofficial junior team for the energy drink company next year.

It would mark Vips' first outing in an F2 car since his four-round spell deputising for the injured Sean Gelael at DAMS concluded at Sochi, and suggests Luca Ghiotto's unexpectedly extended F2 career is now at a close.

Ferrari-backed Marcus Armstrong and Williams tester Roy Nissany will form an all new line-up at DAMS for the three-day test, moving across from ART and Trident respectively.

Armstrong's place at ART will be taken by Theo Pourchaire, who finished second in this year's F3 standings and made his F2 debut with HWA in the Bahrain double header.

Logan Sargeant, who narrowly missed out on second in the F3 standings to Pourchaire, is another F3 driver to be confirmed for the test at Campos Racing, alongside the previously confirmed series returnee Ralph Boschung. 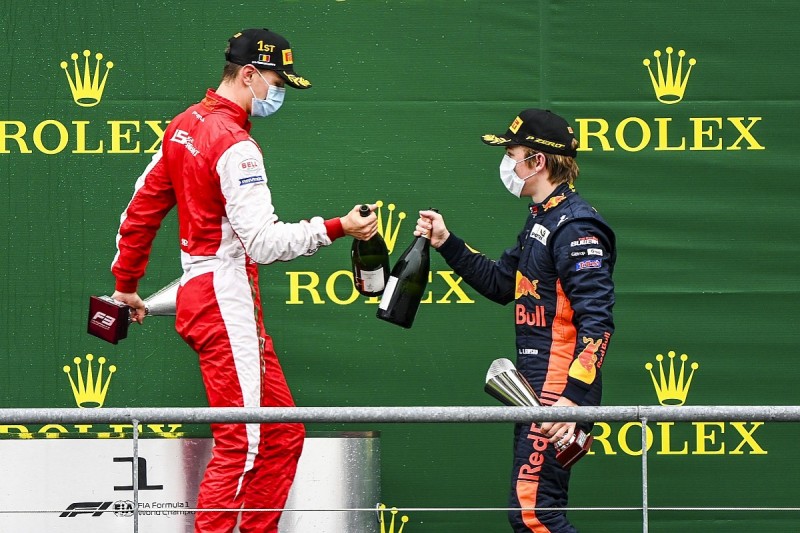 Callum Ilott, this year's championship runner-up with UNI-Virtuosi, will get one day of running with Charouz, with F3 graduate David Beckmann and 2020 Campos F2 driver Guilherme Samaia also driving for the team.

Promising Brazilian Felipe Drugovich will make his UNI-Virtuosi debut following the news that he will switch to the outfit from MP Motorsport next season, with the other seat to be shared by 2020 team regular Guanyu Zhou (day 1 and 2) and F3 racer Clement Novalak (day 3).

The MP team meanwhile will test with this year's Charouz racer Louis Deletraz and Lirim Zendeli, the latter moving up from F3.

Ex-Formula 1 Roberto Merhi will return behind the wheel of an F2 car with HWA for the first time since his 2018 campaign with MP Motorsport and Campos, and will test alongside F3 midfielder Matteo Nannini, the nephew of ex-Minardi and Benetton F1 driver Alessandro.