Mick Schumacher says his crash with Tatiana Calderon was a "now or never" move, after he spun the Alfa Romeo Formula 1 junior in the Monaco Formula 2 feature race

Schumacher opted for an alternate strategy and started on the supersoft tyres, and was the highest-placed driver to have stopped when he clipped the right-rear of Calderon - who was on soft tyres and yet to pit - on lap 19 of 41.

That incident blocked the track and caused a lengthy red-flag delay, after which Schumacher was able continue but was awarded a drivethrough penalty.

He was also given a five-second penalty for leaving the track and gaining an advantage on the first green-flag lap after the restart.

"A special race, a lot going on," said Prema Racing driver Schumacher, who had run fourth before his stop.

"We did not have the best start, also we were on the damp side of the track, but in general I was quite happy with the performance of us as a team and of the car, especially before our pitstop when I could keep up with the guys on prime [soft] tyres even though we were on options.

"When I was catching up to Tatiana, I was around two seconds faster and I knew I needed to go by.

"In that section of the track she was pretty slow, so it was a bit of a 'now or never' situation.

"From that point onwards the race was obviously compromised.

"For sure it was not the race we had expected, but that's Monaco. Really a special track.

"We logged a lot of laps, I felt comfortable and quick, so we will try to be back motivated tomorrow." 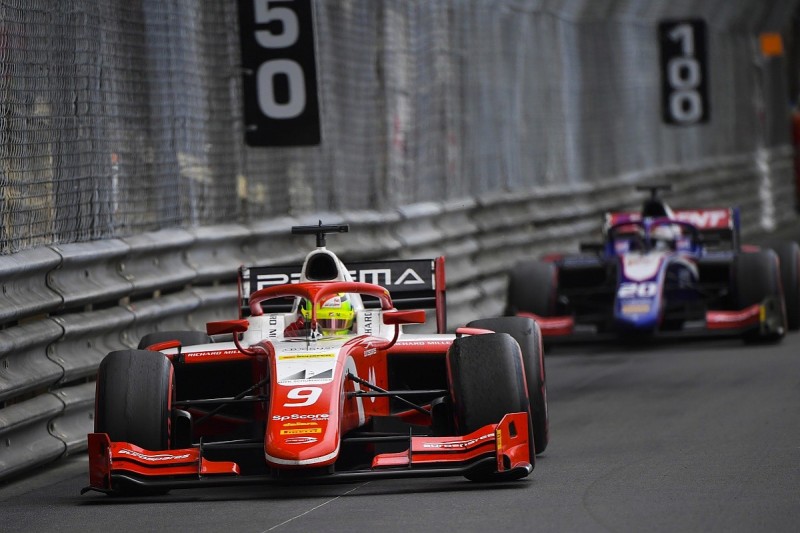 Schumacher finished 14th, while Calderon had to remain in the pits with damage at the restart. She was the last recorded finisher in 16th, two laps down.

Calderon believed a 12th-place finish was possible from 19th on the grid, before the incident.

"I saw him coming from a few laps before, I was trying to survive on the primes," Calderon told Autosport.

"To be honest I never thought he would try and make the move there, I just felt a little touch on the rear right and spun. [There was] nothing we could do."