MP Motorsport driver King shadowed Aitken until lap seven where he made his move at Turn 1, and defended at the Variante della Roggia where Aitken had to take to the kerbs to avoid incident.

But after a virtual safety car, Campos Racing's Aitken got a great run on the main straight and retook the lead into Turn 1.

One lap later, Aitken went off into the run-off again at the Della Roggia chicane as King had taken the inside line and appeared to have the advantage.

Instead of conceding the place, Aitken held the lead at the exit as King had to run off at the second part of the chicane.

That allowed Sauber Junior Team driver Ilott to demote King from first to third in a matter of metres.

On the last lap, Ilott tried a last ditch attempt to divebomb Aitken, but a locked front-left tyre sent him onto the grass at Turn 1 which led to clipping the wall and a spin.

Having worn his tyre down to the carcass, Ilott suffered a puncture and trundled home in 12th.

Aitken was able to escape after Ilott's issues, with King second.

King complained after the race that Aitken had been weaving around on the straights in order to break the tow, calling Aitken's behaviour "dangerous". 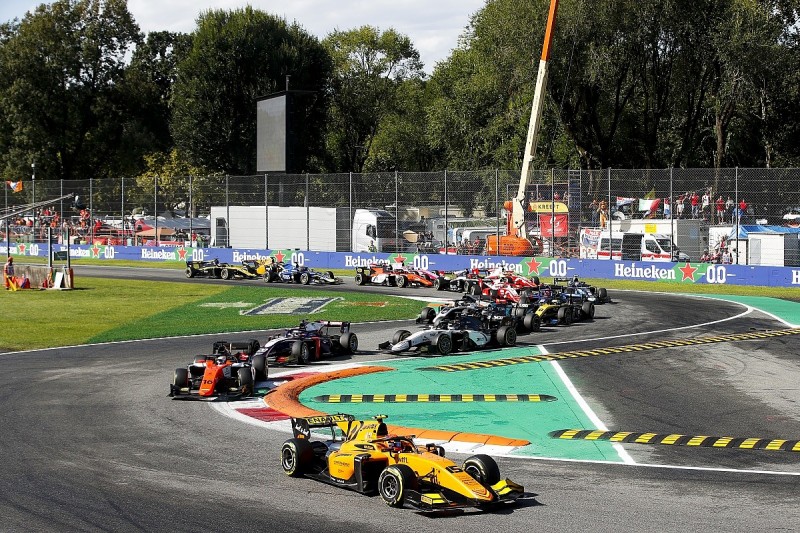 Championship leader Nyck de Vries had fallen back from the top three with four laps to go when he had a terrifying moment at Turn 1, having to take to the grass after locking up to avoid King.

Feature race winner Nobuharu Matsushita, took third on the road - almost passing King at the last after benefitting from de Vries's error earlier on - but the Carlin driver's VSC infringement handed the final podium placing back to de Vries.

The latter spun and had to retire, while Ghiotto pitted for a broken win and finished 15th and last.

Schumacher had started 14th after a technical issue while in the fight for the top six the day before.

Fellow Ferrari junior Giuliano Alesi raced bravely and took seventh, having been involved in a number of battles throughout the race.

Carlin's second driver Louis Deletraz made some racy moves to recover to eighth having been taken out of the feature race, just 0.5s clear of ART driver Nikita Mazepin.

Championship contender Nicholas Latifi struggled throughout the race, and although he ran in the top eight early he then fell back and was passed at will - but ultimately rounded out the top 10 after Ilott sank down the order on the last lap.