Honda Formula 1 junior Nobuharu Matsushita took a second Formula 2 feature race win of 2019 at Monza ahead of Luca Ghiotto, who ran with an alternate strategy

Matsushita took the lead at the Variante della Roggia chicane on lap four of 30 and a rapid pitstop from his Carlin squad meant he emerged comfortably ahead of Sauber Junior Team polesitter Callum Ilott.

But Ilott closed the gap on the medium tyres and worked his way into DRS range. Matsushita held Ilott at arms length lap after lap as he managed the tyres.

With less than 10 to go, Matsushita cranked up the pace and edged out of range.

His biggest threat to victory at that point was Ghiotto, who started on the medium tyres and was into the top five within two laps from 13th on the grid.

He delivered a near perfect stint on the tyres, but a wheel-gun issue robbed him of any chance to fight for the win on his softer tyres in the closing stages.

Matsushita's front-left turning vane then came off with eight laps to go, but it didn't affect his pace as he stormed to a second race win of the year, making up for an embarrassing spin in mixed conditions in qualifying, where his fifth place was safeguarded only by worsening track conditions.

Nyck de Vries started at the back of the grid due to not having enough fuel after qualifying, due to a team error, robbing him of fourth on the grid.

However he remained calm and was into the top six on lap 10 of 30, and continued to set a strong pace. He proved rapid on the medium tyre and reeled Ilott in during the closing stages.

After erasing a gap of over six seconds to Ilott - who maybe pushed to hard trying to reel in Matsushita earlier on - he took second with four laps to go at Turn 1. 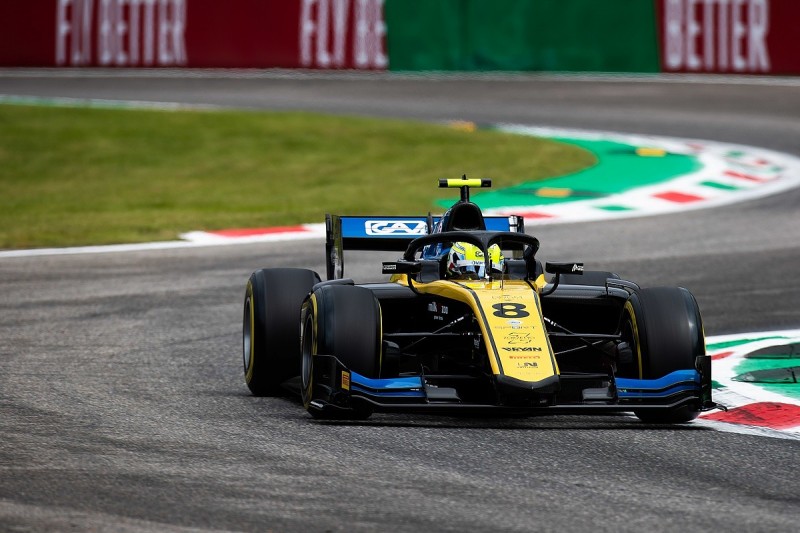 But it was not over there, as a charging Ghiotto came back through the pack. He passed an Ilott struggling with worn tyres with three laps to go, and dived past de Vries at the entry to the Ascari chicane with two laps remaining.

Without the pitstop issue Ghiotto would have almost certainly won the race after finishing 5.7s behind Matsushita.

De Vries took third - declaring "today we drove like champions" - and extended his championship lead, ahead of Sergio Sette Camara of DAMS.

But the latter was handed a five-second penalty for leaving the track and gaining an advantage in the battle with de Vries, which relegated him to fifth.

Ilott was fourth as a result of Camara's penalty, racing just a week after team-mate Juan Manuel Correa was injured in the tragic crash which claimed the life of Ilott's former team-mate Anthoine Hubert.

Zhou was later handed a three-place grid penalty for Sunday's feature race, where he will start at the back of the grid.