De Vries pulled to the side of the road just after Monza qualifying had finished and did not make it back to the pits.

A 0.8kg sample of fuel must be obtainable from any car at any point during the event.

De Vries has a 34-point championship lead over Williams Formula 1 junior and DAMS driver Nicholas Latifi, but de Vries will now start from the back of the grid - in a position to be decided by the stewards - while Latifi will line up in sixth.

A statement from the F2 website read: "Competitors must ensure that a 0.8kg sample of fuel may be taken from the car at any time during the event.

"De Vries' car was not able to supply this sample when tested.

"The stewards determined that ART Grand Prix made a miscalculation on the number of laps that had been completed, as an additional lap was completed, and therefore the fuel load that had been calculated before the start of the session was insufficient. 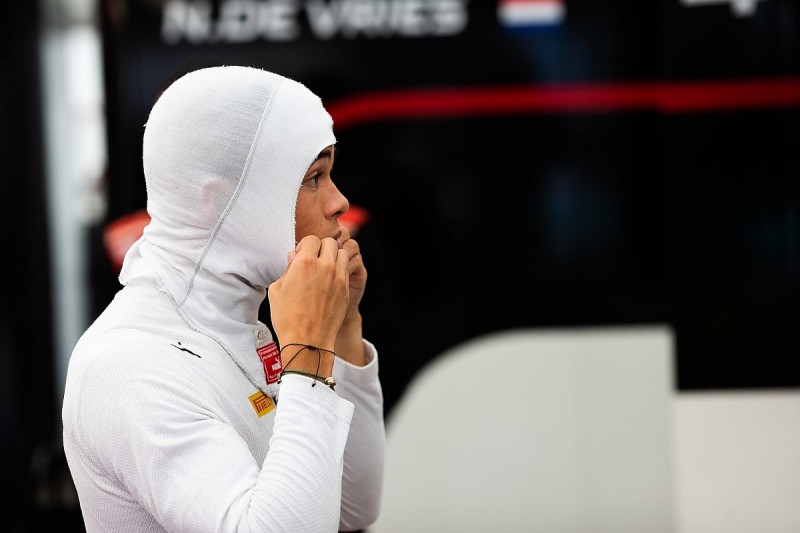 "As a consequence, the Dutchman has been disqualified from the results and all his lap times from the session have all been cancelled.

"De Vries, who had originally classified fourth, has been given permission to start tomorrow's feature race in a position to be determined by the stewards."

Sebastien Philippe, the ART team boss, explained how the mistake was allowed to happen.

"It was a tricky qualifying, it was raining a bit. We had to stay out as long as possible," he said.

"We put quite a lot of fuel in when we started the second run, and let's say we fucked up for one lap on our calculation. We thought we were on, let's say lap eight and it was lap nine. We messed up, it shouldn't happen but it did.

"I feel bad for Nyck as he did the job on the second set, the track was not good and he still managed to do the best lap of anyone. But anyway it's Monza, I'm sure we can recover today."

De Vries said it was a "very unfortunate" mistake.

"Everyone makes a mistake it's a part of the sport. We'll take it together and bounce back today," he said.

"It wasn't a great a great qualifying session for us, I didn't do the job on the first set, I was too conservative, but I kind of made up for it on the second set I guess as we were one pf the only ones to significantly improve.

"Unfortunately it was a small miscalculation. Under normal circumstances it's very unlikely to happen as you have a standard run plan.

"It's not helping [for the championship], let's put it that way, but we still need to race so let's focus on that and we'll see this evening."

He is suffering from the flu but still managed to originally qualify fifth before de Vries's penalty.