Some teams and drivers ran tributes to Hubert and messages of support for Juan Manuel Correa on their cars.

Correa remains stable in intensive care after being involved in the same incident which claimed the life of Hubert.

Most drivers chose to remain in the pits for the first 25 minutes of the 45-minute session, with Correa's team-mate Callum IIott setting the early pace.

It did not take championship leader Nyck de Vries long to assert himself at the top of the leaderboard when most of the grid came out in the final 18 minutes.

De Vries remained top until the last four minutes when Ghiotto shot to the top of the leaderboard.

However, Ghiotto and team-mate Guan Yu Zhou are under investigation as the Virtuosi Racing drivers used wet tyres for their installation laps, which is against regulations if the session is not declared wet.

Despite overnight rain and some during the earlier Formula 1 free practice session, F2's running remained dry. 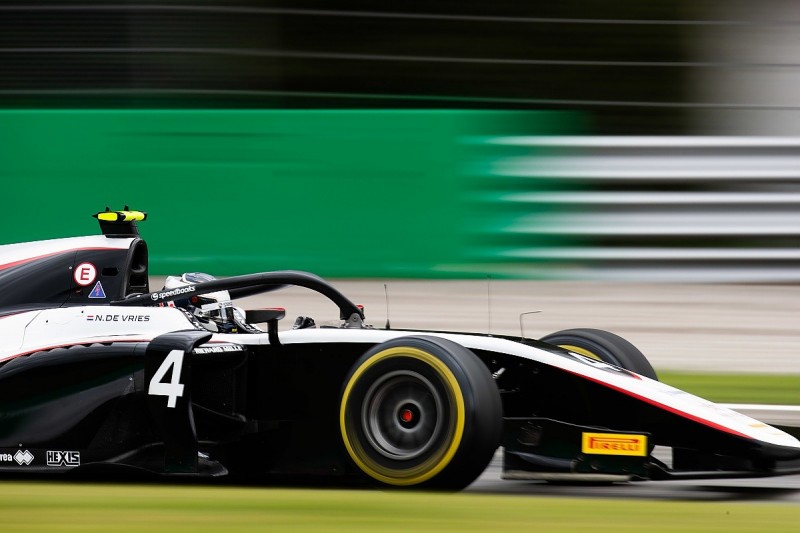 ART Grand Prix driver De Vries - who holds a 34-point championship lead over Nicholas Latifi - held on for second behind Ghiotto while Carlin's Louis Deletraz rounded out the top three with his team-mate Nobuharu Matsushita just behind.

Jack Aitken was an early session leader despite running wide at the Parabolica, but the Campos Racing driver's follow-up laps were enough for fifth ahead of DAMS' Latifi.

Sauber Junior Team, Arden and Trident are all running a single car at Monza.

Arden and the Sauber Junior Team chose not to replace Hubert and Correa respectively for this weekend.

The Trident-run car of Giuliano Alesi was impounded after its involvement in the crash at Spa.

Ferrari junior Alesi will race this weekend as he takes over the car of his team-mate, Ralph Boschung, who watches from the sidelines.

Ilott was the best of the single-car teams in 10th, with Alesi 12th and Calderon 16th.

McLaren development driver Sergio Sette Camara has been suffering from the flu and topped the session early on, but ultimately fell to 11th.

Trident down to one car after Alesi entry impounded following Spa