Ilott's pole came as his team-mate Correa remains stable in intensive care after being caught up the tragic Spa crash which claimed the life Anthoine Hubert one week ago.

The drivers were instantly under pressure as the already falling drizzle was forecast to increase to heavy rain 10 minutes into the session, making the first lap potentially key.

But rain abated for the first part of the session as Ferrari Academy driver Ilott starred. Championship leader Nyck de Vries and contender Luca Ghiotto ran first on the road but were constantly pushed back by those behind as the track improved.

But with 20 minutes remaining, Honda junior Nobuharu Matsushita lost the rear of his Carlin-run car at Variante della Roggia chicane, which brought out a red flag as he got stuck in the gravel. Rain hit at the same time.

Just as cars began to re-emerge, Tatiana Calderon - the sole Arden runner after the loss of team-mate Hubert at Spa last weekend - lost the rear of her car and stopped at the exit of the Variante della Roggia chicane, like Matsushita.

Attempts at pole recommenced with the first laps arriving with 10 minutes to go, but no one could improve as the track remained slippery, particularly at the two Lesmo corners and Variante della Roggia. 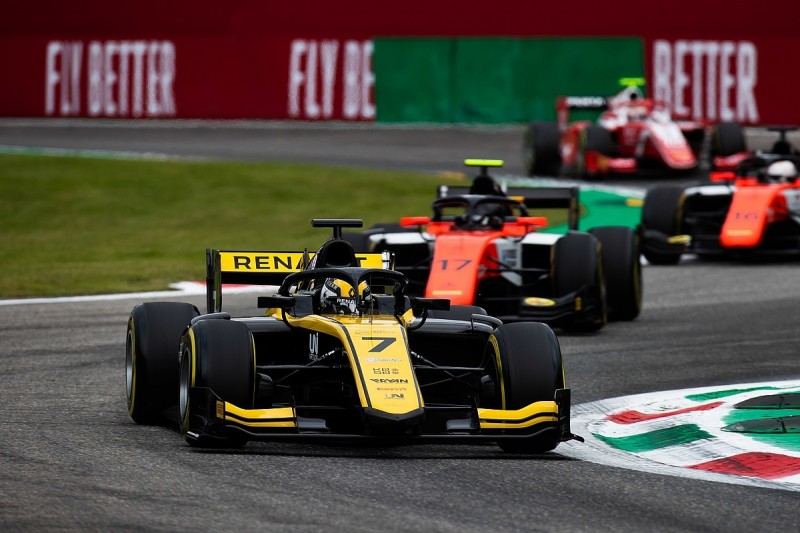 But inside the last minute, improvements finally surfaced and it produced a nail-biting end to the session.

ART Grand Prix's de Vries looked the most likely to undo Ilott's pole time, but he snapped wide at the first Lesmo corner on his last effort and his chance of pole was over. He then pulled to a halt near the Curva Grande with an apparent mechanical issue.

That secured pole for Ilott. Ilott's reaction was muted on the radio.

Zhou, who formed part of Renault's junior programme alongside Hubert, took an emotional runner-up spot to Ilott - his second front row start of the campaign - ahead of de Vries's team-mate Nikita Mazepin.

Louis Deletraz rounded out the top 10. He was set to move into the top three at least with his lap, before his Carlin team-mate Matsushita ruined his lap by bringing out the red flag.