Leclerc completed his first run in qualifying on the medium compound tyres before switching to new softs for his final two efforts.

He ended up with an eighth pole position of the 2017 season and afterwards explained the unusual approach was to make sure he would start at the front of the pack at a track where overtaking is tough.

"We went for a bit of a strange strategy for this qualifying," Leclerc said in the post-session press conference.

"We went for three sets of new tyres - on prime first - and actually we were quite impressed with the laptime we set with the prime tyres because we were the fastest and we had the hardest tyres.

"We could not have put the second set of softs [on] but Luca [Ghiotto, who qualified second] was very close so we decided to go for a last set of softs and it went very well.

"We did this strategy because in Jerez it's very difficult to overtake and we want to win the championship this weekend, so we maximised our chances by doing a good qualifying to be well placed for race one."

Leclerc admitted the decision to run an extra set of new medium tyres in qualifying means he will be at disadvantage for Sunday's sprint race, as he will now be starting on used tyres.

The 19-year-old can become the first rookie winner of the second-tier category since Nico Hulkenberg achieved that feat in 2009 if he wins the feature race.

In that scenario, he would be at least 68 points ahead of Oliver Rowland assuming the Briton, who is currently second in the standings, finishes second and sets fastest lap, with 65 points still on offer.

Leclerc explained that as the feature race is worth more points, it was worth prioritising over Sunday's shorter event.

"We just did that because race one will be crucial for the championship and so we just maximised everything for race one," he said. 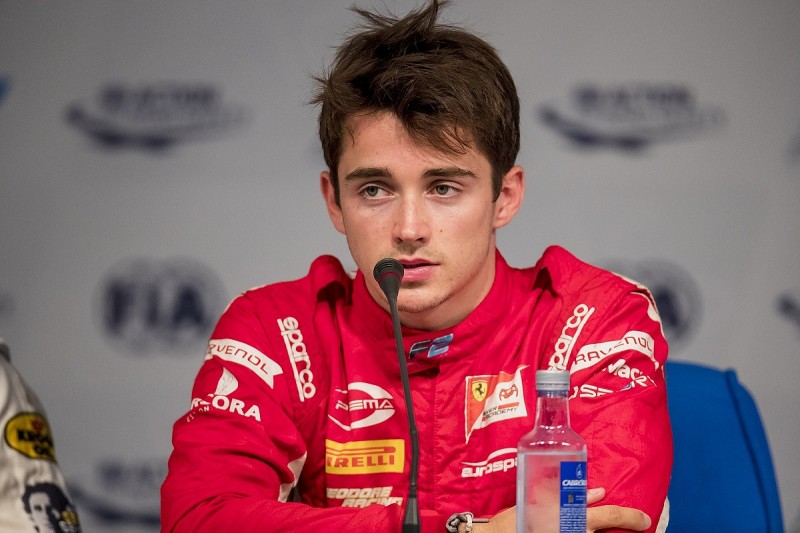 "We still have the same tyres as the others for race one.

"It will be more for race two that [I] will be in trouble a bit more because I will start on used tyres."

Leclerc acknowledged that while clinching the title would be something he thought about on Saturday, he would continue to employ the one-thing-at-a-time mentality he has had all year.

"[I will think about the title] a little bit, obviously, because I want to win the championship more than everything," he said.

"But on the other side, I have taken this weekend like I took every weekend since the beginning of the season - I really do race-by-race - and tomorrow will be exactly the same.

"I will go for the win - and then we'll see about the championship."