Ferrari Formula 1 junior driver Charles Leclerc beat Luca Ghiotto to the top spot in qualifying at Jerez, as he claimed his eighth pole of the 2017 Formula 2 season.

Leclerc produced two laps good enough to claim first on the grid for tomorrow's feature race, and extended his pre-weekend points lead by four to 63.

Several drivers - including Rowland, ART Grand Prix pair Nobuharu Matsushita and Alexander Albon, and Artem Markelov - opted to remain in the pits when the lights went green on the 30-minute session.

Leclerc was one of the drivers to head out straight away and soon moved to the top of the times with a lap of 1m25.112s.

Despite running the medium compound tyre at that stage, he was already quicker than the time he had put in to top Friday's earlier practice session, where he was quickest ahead of Rowland.

Ghiotto slotted into second place and the top two positions remained unchanged, despite both drivers improving their best laps.

Leclerc, who used his mid-session pitstop as an opportunity to change his helmet, improved the best time to 1m24.930s and extended his advantage over Ghiotto.

But although the Russian Time driver hit back with a best effort of 1m24.942s, Leclerc went faster again, ending the day with a quickest time of 1m24.682s.

Ghiotto, who abandoned a final attack after not improving in sectors one and two, wound up 0.260 seconds adrift, with Sette Camara a further 0.315s behind for MP Motorsport. 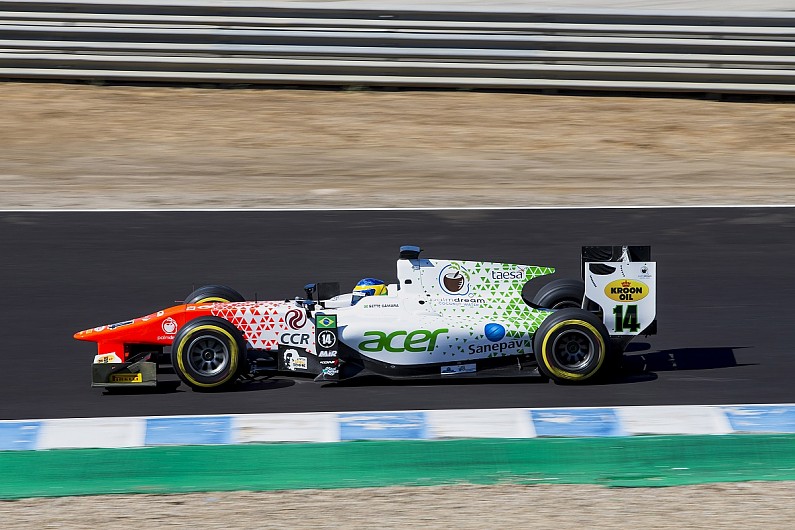 Rowland, who had been third fastest after completing his delayed first run, had looked set to get in amongst the fight for pole as the session headed into its final five minutes.

The Renault F1 development driver was up compared to what would become Leclerc's second best time in sector one before fading slightly in sector two.

But a heavy left-front lock-up at the final Turn 15 hairpin cost him dearly and he could not improve his time, ending up 0.634s behind Leclerc.

Markelov put in a late improvement to finish fifth in the second Russian Time entry, ahead of Albon and Matsushita.

Alex Palou, who is making is F2 debut for Campos Racing after taking over from the recently retired Robert Visoiu, qualified 11th.

Rene Binder - returning to the series where he started 73 races when it was known as GP2 - qualified 17th for Rapax.