George Russell topped yet another Formula 2 practice session at the Hungaroring, while the championship will not return to safety car starts despite more start trouble

The championship had switched to rolling starts behind the safety car for the Red Bull Ring and Silverstone due to "safety reasons" following the difficulty with the new F2 2018's tricky-to-operate clutch.

F2 acted between the British and Hungarian rounds by bringing software updates and a new clutch basket, giving teams 100kms of testing that equated to around 10 practice starts per driver in the break.

But in the practice starts at the end of Friday's session, there was still trouble as two cars stalled. F2 confirmed that the race will still feature a standing start, returning to normal procedure.

Nyck de Vries has had an up and down season, but repeated his tight-circuit form from Monaco and Baku by taking second, 0.3 seconds off Russell, with Sergio Sette Camara of Carlin in third.

Luca Ghiotto and Alexander Albon - the latter among those to top the session for a spell - rounded out the top five. 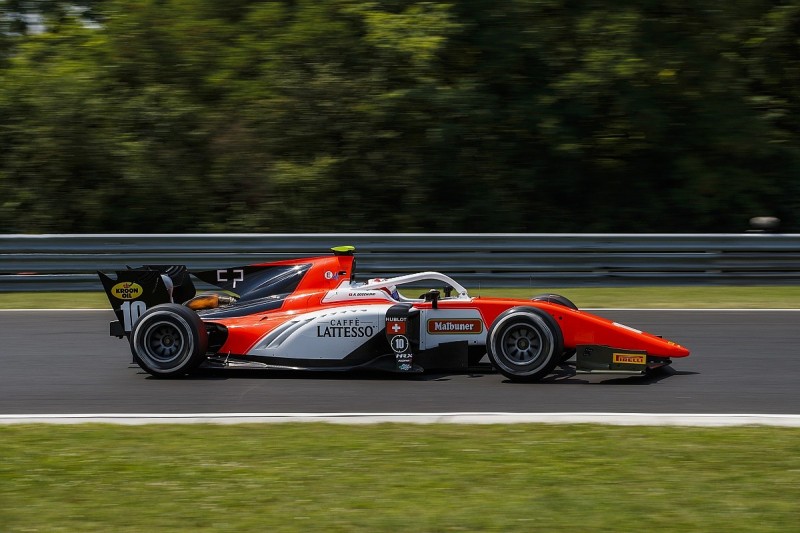 Ralph Boschung of MP is looking to end a run of poor reliability having not scored in five races, and was faster than ex-Formula 1 driver team-mate Roberto Merhi (who was 12th) to take sixth, ahead of Nirei Fukuzumi. The Honda junior stalled in the pits during the practice starts.

Landon Norris couldn't match team-mate Sette Camara and took eighth ahead of Jack Aitken, who will be looking to channel the form he had at this circuit when he took a win, pole and fastest lap in GP3 last year.

Artem Markelov had two lock-ups, and a sideways moment trying to drive around Roy Nissany, all at Turn 1. But he managed to get his Russian Time machine into the top 10.

The session was interrupted by an unusual crash for Honda protege and Markelov's team-mate Tadasuke Makino.

His car speared into the barriers at Turn 3, an unlikely place to crash, with 35 minutes to go, prompting a 10-minute red flag. Makino was unhurt.