DAMS driver Albon emerged on top of a scrap with Russell on the opening lap, though dropped to third through the pit stop phase as his ART Grand Prix rival hit the front.

Russell held a four-second advantage over Prema Racing's Nyck de Vries, with Albon eight seconds back, but the pack was bunched when Roy Nissany's crash at Turn 5 triggered the deployment of the safety car.

On the restart, Russell attempted to defend from de Vries, but the Dutchman dived down the inside at Turn 1.

He locked up and forced Russell into the run-off to avoid him, which Russell described as "a hero move"; both slumped down the order in the incident.

Albon also ran deep, allowing Antonio Fuoco into the lead, but the DAMS driver remained within sight of the Charouz Racing System driver.

An engine failure for the out-of-contention Artem Markelov through the second sector left residual smoke, and Fuoco lost more time relative to Albon amid the limited visibility.

Albon latched onto the rear of Fuoco along the lengthy back straight and seized the lead over the start/finish line, going on to record his first win in the category.

Despite Russell's disappointment, all was not lost for his ART Grand Prix team, as Jack Aitken turned a stall on the formation lap into second place with an incredible drive, unseating Fuoco in the latter stages.

Fuoco had started 12th and nonetheless gave the new-to-F2 Charouz team its best result yet as he recorded a podium finish. 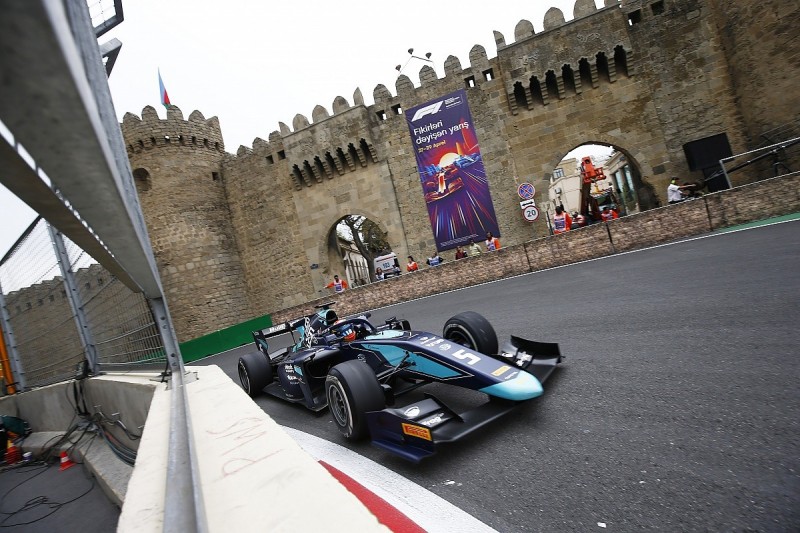 Sergio Sette Camara had to defend hard in the latter stages to take fourth, as he came under pressure from Nicholas Latifi - who started the race 20th and last - and Lando Norris.

McLaren F1 reserve Norris was due to start from the front row of the grid but stalled on the formation lap, forcing him into a recovery drive where he struggled to make up places.

Norris was aided by the chaotic restart and a number of high profile retirements, as he preserved the championship lead.

Ralph Boschung battled MP Motorsport team-mate Roberto Merhi late on but held on to seventh, as Tadasuke Makino, another early staller, and Sean Gelael rounded out the top 10.

Among the other retirees, Arjun Maini suffered engine trouble during a strong run well inside the top 10. Louis Deletraz was lost at Turn 1 in the melee after clipping Maximilian Gunther's Arden, and was released from the medical centre without injury.

Nissany's shunt compounded a dismal day for Campos Racing, after Luca Ghiotto spun into the wall exiting Turn 16 on the opening lap.