Matevos Isaakyan overcame Friday engine problems to take his second Formula V8 3.5 win of 2017 as championship leader Pietro Fittipaldi was involved in an opening-lap collision at the Nurburgring

Isaakyan, who competes for SMP Racing by AVF, told Autosport that the engine he used for qualifying on Friday was so down on power that he was losing 0.5 seconds per lap down the straights.

An overnight change seemed to do the trick as he made a lightning start from third on the grid to go down the middle of debutant polesitter Alex Palou and Lotus driver Fittipaldi.

Leading by the first corner, Isaakyan avoided the contact that took place behind as third-placed Fittipaldi was rear-ended by Teo Martin Motorsport driver Palou, who outbraked himself going into Turn 3.

Palou had to pit for a new front wing and Fittipaldi fell to seventh, just behind the fast-starting Rene Binder, who had picked up four places from his 10th place start.

Also making a positive charge up the field was Alfonso Celis.

The Fortec Motorsports driver, who was suffering from engine problems of his own in the second qualifying session on Saturday morning, avoided the collisions and finished the first lap in second place, but more than two seconds behind Isaakyan. 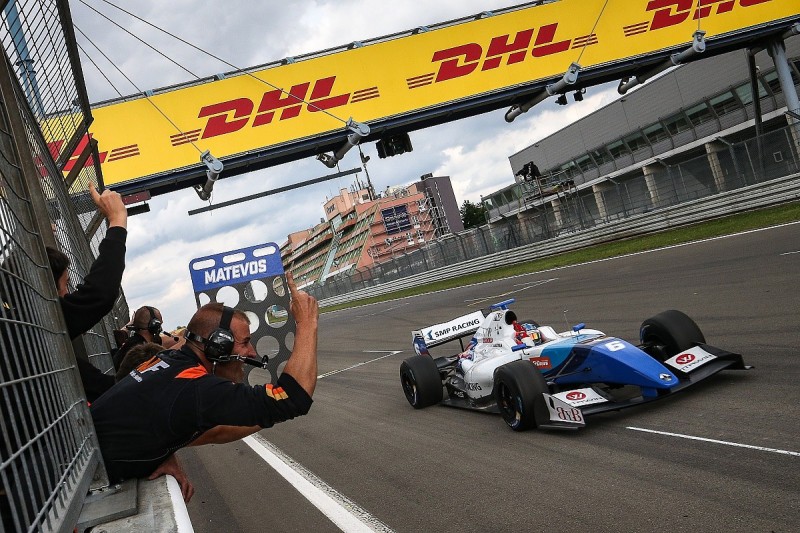 For the majority of the 40-minute race, positions remained static as significant gaps started forming between the drivers.

In the closing minutes though, Roy Nissany looked like he was in a good position to take the last spot on the podium away from Egor Orudzhev before going too deep into Turn 1.

That allowed Orudzhev to pull away and take a double podium for SMP.

Celis finished second, unable to eat into the six-second advantage Isaakyan had built up.

Fifth place went to RP Motorsport's Yu Kanamaru, defending strongly from Binder who had seemingly overcome the "unexplainable" lack of pace he had in qualifying two.

Fittipaldi saw his lead cut in the points standings as he had to settle for seventh.