He was eventually passed by Robin Frijns, who went on to win the race for Envision Virgin Racing.

"I look back on [the season] and think, it's a common theme in Formula E, but I think of how many different results were lost for so many different reasons," Sims, whose previous best had been his two fourth places in Marrakech and the first New York race, told Autosport.

Sims lost a likely win in Marrakech as a result of a collision with his BMW team-mate Antonio Felix da Costa, and then lost third in Santiago due to a post-race time penalty for late contact with Edoardo Mortara.

He was then caught up in Nelson Piquet Jr's airborne accident in Mexico City, retired with crash damage in both Hong Kong and at Sanya, then had further clashes that put him out in Paris and Monaco after finishing 17th in Rome. 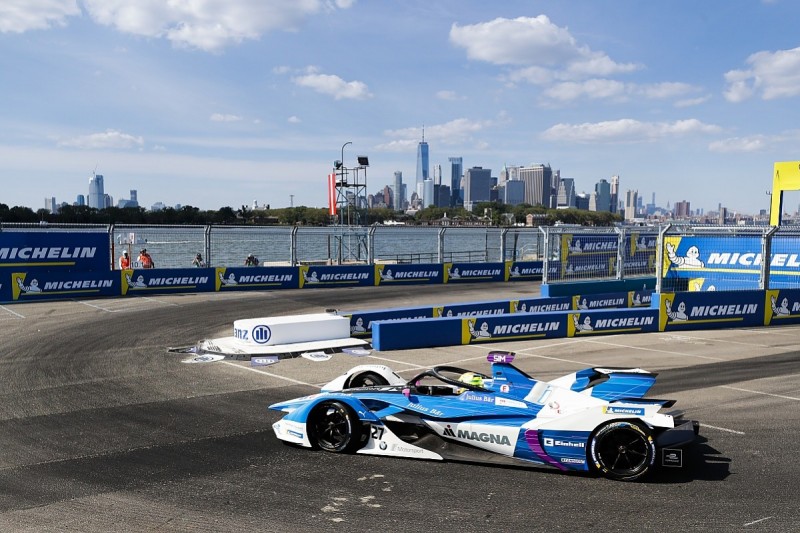 Seventh and 11th places in Berlin and Bern followed before he took fourth in the New York opener, which could have been third had he not given da Costa that place in an ultimately fruitless bid to boost his team-mate's title chances.

Da Costa was eliminated from title contention at the end of the first New York race despite Sims obeying the team order to let da Costa go by.

"It's nice to get a result and re-affirm we weren't crazy for sticking to our plans," Sims continued.

"Certainly could have been numerous more top 10 finishes and lot more points scored, but that's probably same for lots of people up and down the grid.

"The name of the game at the end of the day - [FE drivers need] lots of clean races and keep to scoring. [I'll] keep learning, keep doing better."

Sims said things "couldn't have gone much better in qualifying" as he took BMW's second pole of the season - da Costa took its first as a works FE entrant at the first race of the season in Saudi Arabia - with Andretti continuing to own the entry and run the race team.

"Really pleased with that," Sims added. "[Starting on pole] heightens your expectations somewhat.

"Unfortunately it means you can be disappointed with anything other than the win. [But if I] take a step back and think of it as a whole, it's an awesome weekend."